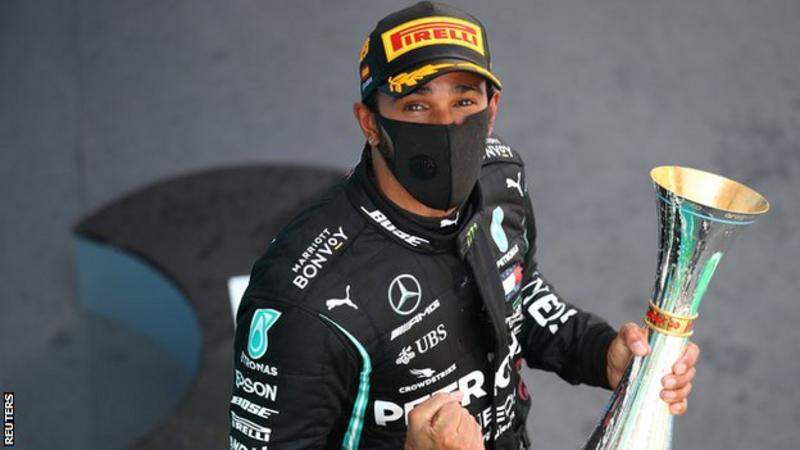 Lewis Hamilton said he touched perfection on his way to winning the Spanish Grand Prix, and he is certainly setting new standards as he makes history in Formula 1.

It was far from the most exciting race to watch, such was Hamilton’s control, but inside his Mercedes, its driver said he reached a level of performance that even he has rarely found before.

He had found the fabled “zone” – a place where performance flows easily, where new levels are achieved – that is the goal of all athletes.

“There is an immense amount of pressure on all of us to perform weekend-in, weekend-out,” Hamilton said. “And in the chase for perfection and being in that zone, you can be very, very close but still be slightly out and not be quite in your perfect rhythm.

“But for whatever reason today, I can’t quite pinpoint why, I felt like I was in the most… It was like a clear zone.

“The clarity I had when I was driving, I am sure I’ve had it before but I don’t really know how really to get into that zone. It’s hard to say what helps you get into that space. But of course I will evaluate the weekend and the feeling today.

“Honestly, I felt fantastic in the car. It was physically challenging but in terms of not making any mistakes, delivering lap upon lap upon lap, I was in the perfect zone. And that’s the zone I dream of being in.

“I never would have expected to have a lead of 24 seconds. Even catching traffic, I was gaining time not losing time. There were all these elements perfectly in place. I was very centred in my core and I’ve got to try to get there every day.”

As Hamilton climbed out of the car and talked of being in “a daze”, what immediately sprung to mind was a moment etched into Formula 1 iconography that happened to Hamilton’s childhood hero, Ayrton Senna.

The Brazilian famously described having a kind of out-of-body experience during qualifying at the Monaco Grand Prix in 1988 as he went faster and faster, into a realm way beyond the rest.

“I wouldn’t describe it the same way as Ayrton would,” Hamilton said. “It’s not an out-of-body experience. Just in my highest form, I would say.

“I always like to talk about trying to be our higher selves, because each of us has an unlimited capacity.

“It just felt like I was at a high plane. I am always talking about perfect races and that was one of them.

“We all try for perfection and it is not always easy to deliver like that but today, for me and the car, I was ecstatic.

“When I came across the line I didn’t realise it was the last lap. I was still going. I was like a horse with blinkers on. I was going to keep going.

“In terms of how I drove in really delivering, today was right up there with some of the best I have felt I’ve done.

“It is super-exciting. We move on to the next thing but I need to make sure I really appreciate this moment. It is easy to forget just how amazing it is where we are and what we’re doing. So I am definitely going to have a glass of wine to celebrate.”

Hamilton was in a league of his own from the very beginning of 66 laps of the Circuit de Barcelona-Catalunya, and very soon he will be in another one in terms of his standing in F1 history.

The Mercedes driver has long been the sport’s pole-position king, and on Saturday he took his 92nd – 24 more than anyone else.

His victory on Sunday gave him another record, in taking him past Michael Schumacher’s total of 155 podium finishes.

It will not be the only record Hamilton breaks this year.

He is now only three victories away from Schumacher’s all-time record of 91 wins. So when he inevitably equals the German’s tally of seven world titles later this year, Hamilton will become the most successful driver in F1 history. It is only a matter of time. And, for that matter, what can stop him adding an eighth championship in 2021?

After winning four of the first six races this season, Hamilton is 43 points – not far off two clear wins – ahead of team-mate Valtteri Bottas, the only man who can realistically challenge him, because he’s the only other driver with the best car.

Red Bull’s Max Verstappen was outstanding again in splitting the Mercedes drivers at the flag, and he retained second place in the championship, 37 points behind Hamilton.

But Verstappen is under no illusions that he is in a title fight with Hamilton, despite his tyre-influenced victory at Silverstone a week ago.

“We just have to try to focus on ourselves,” Verstappen said, “try to improve, be a bit more competitive and not just rely on softer (tyre) compounds. Have to find a bit more performance in the car and engine and be more competitive.”

Sunday was a dispiriting experience for Bottas, a bad start dropping him to fourth on the first lap, from which he could recover only to third while Hamilton disappeared out front.

“I have no idea what the points difference is,” Bottas said, “but it is way too big and I can see again the championship drifting away. I will always bounce back, but right now I want to be somewhere else other than this.”

The reality is that Hamilton is just that bit too good for him.

Hamilton is driven by an apparently unquenchable personal drive to win, to be better today than he was yesterday, but there is something else pushing him on this year, too.

At the end of the race, he pointed to the top of his helmet, where the Black Lives Matter symbol has been painted.

“Lewis has always been at his best when he fought adversity,” said Mercedes F1 boss Toto Wolff. “And the Black Lives Matter movement is close to his heart and it certainly helps in terms of motivation. But I am impressed by how he develops every season. He is better in terms of his personality and as a driver.

“It is really inspiring that as a mid-30-year-old he is able to show us how you can develop as a personality and how you can improve your game. How you can have interest in things outside motor racing that makes you stronger.”

Hamilton said: “It continues to be an issue. There are so many issues around the world but right now that is something I’m very focused on.

“We are taking a stance when we start the race. It is almost a formality now, but it is important to continue to push.

“There are still many companies and people around the world who have not held themselves accountable.

“In America, there are still plenty of those policemen living a normal life even though they killed someone innocent. No one has been brought to justice and we have to continue to fight for that.”

There are issues within the sport on which he is determined to make a mark, too.

In the early laps of the Spanish Grand Prix, Hamilton was lapping nearly nine seconds slower than his pole position time, to keep his tyres from overheating. This sounds extreme – and it was – but to one degree or another it is a feature of virtually every race, and has been since Pirelli entered F1 as its sole tyre supplier in 2011.

The drivers have been pushing for some years now for better tyres, on which they can race harder, follow other cars more closely, without the rubber being overheated and ruined.

Hamilton attended a meeting of the FIA world council, F1’s legislative body, in Paris last year, along with Grand Prix Drivers’ Association chairman Alex Wurz, partly to ensure that when bosses set the next objectives for Pirelli, they got it right.

And even after a race as defining as this one, Hamilton had time to press the point home.

“We really need to put a lot of pressure on Pirelli for the future,” he said. “They didn’t unfortunately do a great job at the end of last year to develop the 2020 tyre so they had to carry over the same tyre from 2019 into this season.

“In the past, when they made the target letter (that defines how F1 wants the tyres to behave), the drivers were not a part of that discussion. That’s why last year I went to the Concorde meeting in Paris to represent the drivers. We want to help them make sure they set the target letter correctly.

“They’re probably not going to be able to do it for next year but for 2022 we need a better tyre. A tyre that gives us more grip, better safety and enables us to drive closer to cars and give you guys and the fans better racing.

“Right now, we are doing a serious amount of management and I don’t think that’s what the fans want. It’s not what a racing driver wants, to have to manage multiple seconds behind a car because the tyres are not good enough.

“We want to help Pirelli make a better tyre, if they can. And that’s obviously the question.”