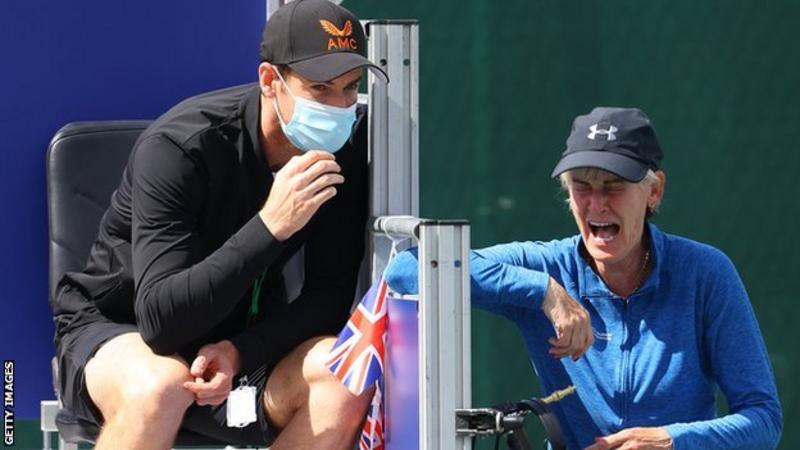 The 33-year-old Briton, often mischaracterised as dour, is here to prove once again that he’s actually lots of fun. He arrived in New York this week ready for this month’s US Open. All players have to take a Covid-19 test and then quarantine for 24 hours to await results.

Murray has been filling the time by inviting fans to send questions on Instagram. His responses include some predictions for life after retirement and his views on dental hygiene.

He thinks Serena is the GOAT

Murray and Williams are good pals and ‘Mur-ena’, as they came to be known, were an impressive mixed doubles force at Wimbledon 2019.

Feliciano Lopez and Lloyd Glasspool provided him with a doubles dilemma

In 2019, Lopez and Murray won the doubles at Queen’s after Murray came back from hip surgery. Murray and Glasspool then enjoyed doubles success over Dom Inglot and Alastair Gray at this year’s Battle of the Brits.

One fan wanted to know who Murray thought was a better doubles partner.

“Both were excellent partners, but @felilopezoficial much better looking,” wrote Andy. How rude! We’d say they’re both pretty handsome lads.

He’s unsure about his future direction

Another fan asked whether Murray would be “satisfied” continuing his career in doubles, “barring a successful singles comeback”.

Murray replied: “I’m not sure,” adding, “I did enjoy playing doubles for a while last year… I’d probably give it a go and see how I felt after a few months.”

He doesn’t think he’s cut out for TV punditry

With the 2020 Madrid Open called off because of coronavirus, a virtual tournament was set up. One of the highlights was Murray commentating on his own play and grunting throughout.

One fan wanted to know, given his “colourful” Madrid VR commentary, whether an onscreen role beckoned post-playing career.

“I have a horrendous voice for TV,” Murray replied. Don’t do yourself down Andy.

Murray had a lot of praise for the 32-year-old Spanish tennis player, who beat him in the Australian Open first round in 2019, writing: “Been in the top 20 for a long time it feels like!”

Agut is currently ranked 12th and was a dark horse at Wimbledon 2019, where he unexpectedly made the semi-finals. Even Bautista himself must have been surprised, because he had to put his stag do in Ibiza on hold to make the match against Novak Djokovic!

His hip sets off metal detectors at airports

Murray has had a battle to get back into tennis after hip surgery. And that’s not the only inconvenience it’s caused. He said that his new metal hip sets off detectors at airports “every time”, adding “embarrassing when they ask me what it is I’ve got in my pocket”.

Asked which ATP player he would like to coach, Murray replied, “@rogerfederer because I would learn a lot and would be interesting to talk tennis with him, watch him train and he would win a lot.”

We can’t help but feel he’s given himself an easy ride there.

Do not speak to him before breakfast (morning breath)

And finally, the question we’ve all been waiting for Murray to answer – “should you brush your teeth before or after breakfast?”

Murray was unequivocal on this, writing: “After surely, no? Some fruit and drinks taste horrendous after brushing teeth.”

Well, we feel like we know so much more about the enigmatic Scot now. What a pleasure. Hope to see him on court soon.