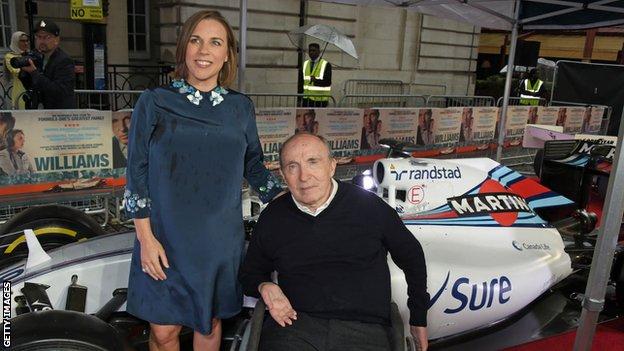 The Williams family will leave the team founded by Sir Frank Williams more than 40 years ago after this weekend’s Italian Grand Prix.

Sir Frank founded Williams in 1977 and turned it into one of the sport’s most successful teams.

But after a series of difficult years, the team was sold to US investment group Dorilton Capital last month.

Williams and his daughter Claire, the deputy team principal, are stepping down.

Williams have won nine constructors’ championships and seven drivers’ titles and dominated large portions of the 1980s and 1990s.

But their last win was in 2012 and for the last two seasons they have finished last in the championship. Financial losses last year led to the Williams family seeking new investment, and that in turn has led to them leaving the team to make way for new management.

Claire Williams said: “With the future of the team now secured, this feels like the appropriate time for us to step away from the sport.

“As a family, we have always prioritised Williams. We have demonstrated that by our recent actions with the strategic review process and we believe now is the right time to hand over the reins and give the new owners the opportunity to take the team into the future.

“We have been in this sport for more than four decades. We are incredibly proud of our track record and the legacy we leave behind.

“We have always been in it for the love of it, for the pure pleasure of going motor racing, so this is not a decision that we have taken lightly but after much reflection and as a family.

“We are greatly appreciative of Dorilton’s encouragement to continue, but in them we know the team will be in good hands and the Williams name will live on.

Matthew Savage, chairman of Dorilton Capital and the team, said: “We fully respect the very tough decision of Claire and the Williams family to step away from the team and the business after securing new resources for its future.

“Claire’s achievement in sustaining Williams Racing’s heritage, relevance and commitment to innovation in a difficult environment since taking charge in 2013 has been nothing short of monumental.

“She has also been hugely instrumental in shaping a more level technical and financial playing field for F1, which will help to ensure the team’s return to the front of the grid in seasons to come.

“We are proud to carry the Williams name into the next exciting phase for the sport.”

Frank Williams founded Williams Grand Prix Engineering with Patrick Head in 1977, and the two forged one of the great partnerships in F1 history.

With Williams as team boss and Head as technical director, the team soon rose to the top of F1 and were responsible for some of the sport’s greatest cars and most successful eras.

Their FW07 won their first race with Clay Regazzoni at the 1979 British Grand Prix, before Australian Alan Jones went on to take Williams’s first drivers’ title in 1980.

Along the way, Williams designed some of the most innovative and celebrated cars in F1, including the FW14B and FW15 of 1992 and 1993, which were packed with new technology such as active suspension.

They were also instrumental in establishing the careers of some of F1’s greatest engineering names.

Ross Brawn, who went on to become technical director at Ferrari through the team’s dominant era of the early 2000s, and win the championship with his own team in 2009, started his career at Williams.

And Adrian Newey, the sport’s most celebrated and successful design engineer, first came to prominence at Williams in the early 1990s, before moving on to win further titles with McLaren and then Red Bull.