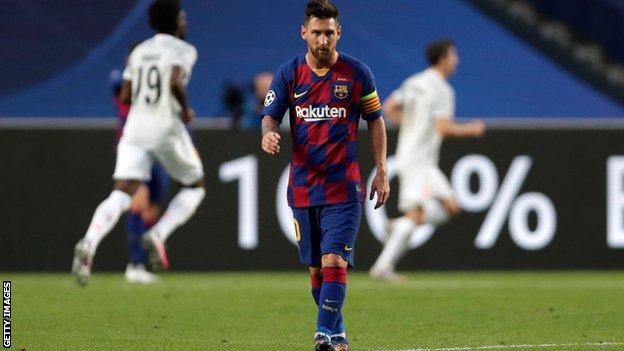 Lionel Messi’s father and agent has told La Liga that the 700m euro (£624m) release clause in the forward’s Barcelona contract is not valid.

Messi, 33, told the Spanish giants last week that he wanted to leave after 20 years on their books and believed he could move for free this summer.

La Liga say they will not de-register Messi unless the clause is met.

However, Jorge Messi said in a statement

that the clause expired at the end of last season.

In the letter sent on Friday, Messi’s father argued that his son’s contract does not specify a date when the option to leave must be exercised, only that it must be done at the end of the campaign.

that Messi was now set to stay in Spain, but Barcelona presidential hopeful Victor Font believes that is unlikely.

“It would be a surprise because it seems his decision is firm,” Font said.

“But, as I’ve always said until it is done there is always hope, so let’s keep hoping this will be the case.”

Manchester City are favourites to sign the six-time Ballon d’Or winner should he leave and Font, who is hoping to take over from current president Josep Bartomeu, believes the chance for him to link up with ex-Barca boss Pep Guardiola is a huge draw for the player.

“What Messi wants is to compete and to win,” he told BBC Sport.

“I am sure that he knows one of the best coaches he has had is Pep and therefore he trusts that Pep can help him win again.

“Manchester City is one of the strongest squads in Europe these days and I think that the combination of that and Pep’s leadership is probably why Messi is thinking that would be a good option.”

Is this the best time to be productive?