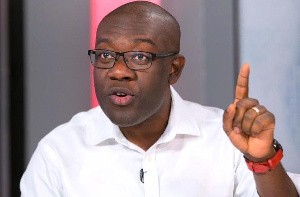 The Minister of Information, Kojo Oppong Nkrumah, has praised the contributions of young appointees in the Akufo-Addo administration and urged them to continue making a difference.

Speaking at the maiden edition of the Nation Building Updates in Accra on Tuesday, 22 September 2020, on the theme: “Leadership that delivers for the youth”, Mr Nkrumah encouraged the young CEOs to continue working hard to make a positive impact.

It highlighted achievements and progress in their respective units for youth empowerment through the commitment and support of the Akufo-Addo administration.

The rest include the National Service Scheme (NSS) and the National Entrepreneurship and Innovation Plan (NEIP).

The Information Minister, who is also the Member of Parliament for Ofoase Ayirebi in the Eastern Region, said it was not surprising that President Akufo-Addo, through these CEOs, has impacted the lives of 2.5 million youth with direct interventions.

“If you take programme by programme and agency by agency, from where they have come from and heading to, there is no doubt that President Akufo-Addo has done massively for the youth.

“These young CEOs have not disappointed the President and are delivering in their various positions,” he said.

He further urged the CEOs to lay foundations as an encouragement for more young people to occupy positions just like they have.

The programme is part of efforts by the government to account to the people of Ghana what the various youth agencies of state have achieved so far since President Nana Akufo-Addo came into office.