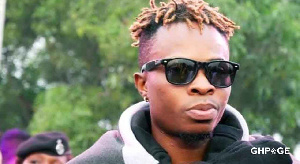 In an interview with host, Foster Romanus on the Late Nite Celebrity Show which airs on eTV Ghana, he shared that the only thing that has changed is his record label, everything else about his music is still the same.

“The fact that I’m not there anymore doesn’t mean I have abandoned the movement or we’re not a family anymore. We’re still a family but I’m just running my own things now. I always did the writing on my own so now it’s just my label Leegang that I’m working under”, he said.

A few months back, Shatta Wale officially announced during a Facebook live that he has sacked his Militants Natty Lee, Joint 77, Addi Self and Captan because according to him, they are lazy musicians who are not ready to be in the limelight despite his coaching tips.

Natty Lee confessed to Foster Romanus that he was hurt when Shatta Wale made those comments that the Militants do not make sensible songs because about a year or two ago when people were bashing him (Shatta) that he does not put out good songs, they stood by him and fought for him.

“If now he thinks that we do not do good songs, that’s his opinion and I must say it hurt me but when Shatta is talking about the Militants, he generalizes it. He does not treat us individually so sometimes when one person offends him, it affects us all”, he added.

According to the ex Shatta Militant, being taken out of the Shatta Movement is not a lost opportunity because he believes that he was not bound to be with the label forever so if it has gotten to the point where Shatta Wale feels that it is time they do things on their own, life still goes on and he is grateful for Shatta’s help and support which has gotten him to the level he is now.

The musician is now under his own record label and management ‘Leegang’ which according to him, already existed before his departure with the Shatta Movement Family.

Shatta Wale’s enemies have made me an enemy – Natty Lee

The National Theatre silenced by coronavirus