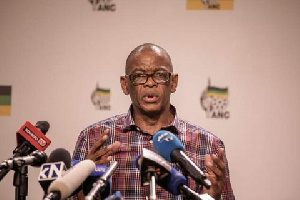 South Africa’s police has denied reports that it has issued an arrest warrant for the ruling party’s secretary general over corruption allegations.

Spokesperson Hangwani Mulaudzi, in a statement, said the reports were “a malicious intent to undermine the integrity” of the police.

Mr Magashule was the premier of the Free State province when funds meant for farmers were allegedly diverted. He has in the past denied any wrongdoing.

His possible arrest would see him losing his job at the party, Reuters news agency reports.

There have been arrests of high profile individuals named in corruption allegations in South Africa lately.