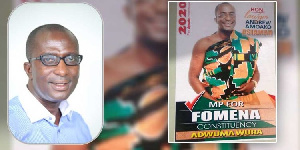 Mr. Ofori Asante explains the sitting MP forfeited his position the moment he decided to contest as an independent candidate, citing Article 97(h) of the 1992 Constitution.

Speaking on Akoma FM’s morning Show ‘GhanAkoma’ hosted by Aduanaba Kofi Asante Ennin on Wednesday, October 7, the MP aspirant further invoked sub-section ‘g’ and ‘h’ of Article 97 of the constitution, citing: “(g) if he leaves the party of which he was a member at the time of his election to Parliament to join another party or seeks to remain in Parliament as an independent member; or”

“(h) if he was elected a member of Parliament as an independent candidate and joins a political party.”

He added that the laws of the land explicitly frown on the posture of the sitting MP and bars him from representing the people of Fomena.

The incumbent MP for Fomena Constituency, Andrews Amoako Asiamah, entered Ghana’s parliament on the ticket of the governing New Patriotic Party (NPP) in 2016 but recuse himself from the June primaries and opted to go for his second term as an Independent Candidate.

Seeking for interpretation of the law, the host roped in Minister for Parliamentary Affairs and MP for Suame Osei Kyei-Mensah-Bonsu for further interpretation.

He asked for patience “for the Electoral Commission to close the filing window then we will know how to discuss this issue because it is very technical”.

He advised that “someone would have to trigger the motion to start the process of forfeiting the MP from his current status only after the filing of forms window is shut”.

Some constituencies in the Ashanti Region have seen the emergence of independent candidates.

About 21 independent candidates from several constituencies including Fomena have declared their intentions.

Fomena is the second constituency to have a sitting MP contest elections as an independent candidate.

In 2008, Edward Ofori-Kuragu of Bosome Freho contested as an independent candidate while finishing his first term.

He lost the primaries to Kwadjo Kyei Frimpong in 2008, but went ahead to win the parliamentary elections in that year.

We cannot fix all roads at a go – MCE