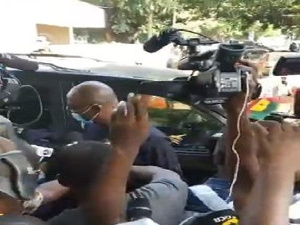 After the news broke that former president of the Republic, Jerry John Rawlings had passed away at the Korle-Bu Teaching hospital, many people, including political stalwarts have stormed his Ridge residence to console the family.

Former Communications Minister, Ekwow Spio Garbrah, clad in a black shirt, was spotted coming out from the late Rawling’s abode.

In an attempt made by the media to get the NDC stalwart to comment on the sad news that has shaken the country, Mr. Spio Garbrah declined to speak.

He walked past the media who tried hard to get to say a word to sit in his car.

Rawlings died at age 73 after reportedly battling an undisclosed ailment for some days.

He is said to have died at the Cardiothoracic Unit of the Korle-Bu Teaching hospital.