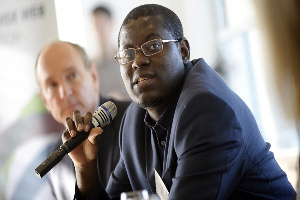 Honorary Vice President of Imani Africa Bright Simons says funds allotted to the office of the Special Prosecutor was locked after he refused to budge over the establishment of his office.

It comes after government claims adequate resources were made available for the Office to operate independently.

“In 2019, your Office submitted a Budget Proposal of GHC360 million out of which Gh¢180,160,225 was approved and appropriated for the Office. This amount was higher than the budget of some Ministries in the current Government, and was made up of GHC33.47million for Compensation of Employees, GHC88.01million for Goods and Services and GHC58.68million for Capital Expenditure. Although your Office did not apply for release of funds in 2019, the Ministry of Finance released GHS65.69million and transferred it into the bank account of your Office for your operations. Only a little of over GHC5.22million had been utilised by you as head of the Office of the Special Prosecutor. In accordance with administrative practices, the unutilised amount of over GHC60.47million should have been returned to the Consolidated Fund, as happens to all Ministries, Departments and Agencies which do not utilise their budget. However, in the case of your Office, the Ministry of Finance rolled over the excess amount of over GHC60.47million to the following year to be utilised by it., Yet, the funds still remain in the bank account of the Office as at 12 November, 2020,” government said.

Commenting on the development on Twitter, Mr Simons said: “He (Amidu) insisted on arrangements for financial disbursements giving him complete control over his recruitments & spending on investigations. He wanted no presidential or Ministerial intrusion or planting of staff etc. Government balked. He held his ground. So funds were locked. The position of the outgone Special Prosecutor was VERY SIMPLE: He did not want an office provided to him pre-bugged by National Security. He wanted complete control over the setting up of his office due to the sensitivity of his work. This was denied. He refused to budge.

Mr. Amidu resigned from his post as Special Prosecutor citing interference by President Akufo-Addo in his work.

“The reaction I received for daring to produce the Agyapa Royalties Limited Transactions anti-corruption report convinces me beyond any reasonable doubt that I was not intended to exercise any independence as the Special Prosecutor in the prevention, investigation, prosecution, and recovery of assets of corruption. My position as the Special Prosecutor has consequently become clearly untenable,” a part of the resignation letter said.

It continued: ”It is essential for me to state for the purpose of the records, and contrary to public perceptions, that my appointment letter was received on 5th February 2020 (almost two (2)-years after my appointment). The copy addressees made no efforts to honour any of the conditions of appointment in terms of emoluments and benefits of the appointment ever since my warrant of appointment was issued on 23rd February 2018 to the date of my letter of resignation.