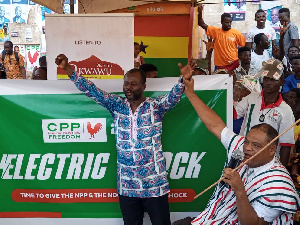 The Convention People’s Party (CPP) has lashed out at the ruling NPP and the opposition NDC for collapsing major industries with their policies and programmes.

The CPP said the two parties have failed to provide state protection for the growth and sustainability of industries initiated by the Nkrumah administration.

According to the Nkrumaist party, the development is responsible for the high unemployment rate and the importation of basic products such as matches and toothpick.

CPP flagbearer Ivor Kobina Greenstreet who took his campaign tour to the defunct Kade Match factory in the Eastern Region said the CPP has the best brains and effective leadership to revive more than a hundred collapsed and ailing state factories.

“We need main industries in strategic areas an not the NAPCO or NADMO kind of employment which is just like you doing your service but proper decent work. This factory as far back as 1964 was able to export matches to ten African countries. In fact that it was the highest exporter of matches so much so that the British match factory had to come and understudy us,” he said.

Mr. Greenstreet said the industrialization policies of the NDC and NPP have failed because of their focus on short term profits instead of long term plans for productivity.

He also denied reports that he has endorsed President Akufo-Addo for next month’s elections.

Meanwhile, the CPP flagbearer has taken his electric shock campaign to Nkawkaw in the Eastern Region. Flagbearer Ivor Greenstreet asked voters in that constituency to elect the CPP’s candidate Mark Osei Yeboah to fix the challenges of high unemployment, poor roads as well as poor telecom and health services.

Mr. Greenstreet said the electorates will wallow in despair, hopelessness, and joblessness if they fail to give the NPP and the NDC the electric shock.

Eyes on Ground: Kumasi-Tatale drivers frustrated over inspection of ID cards at Zabzugu