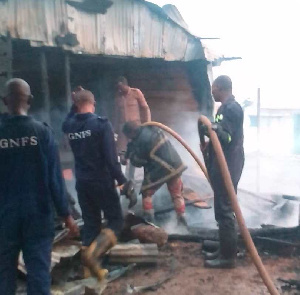 A huge blaze that consumed a four-bedroom house at Feyiase –forced the Electricity Company of Ghana to cut power supply to parts of the Bosomtwe District on Monday dawn.

The fire which started at about 1 am local time also forced occupants to flee for safety.

At least three fire tenders were deployed to the scene to douse the flame which had destroyed properties worth thousands of cedis.

It remains unclear what started the fire as firefighters say investigations have started.

The Ghana National Fire Service (GNFS) has already identified 200 fire hotspots within the Ashanti region to guide its approach in fighting the fire.

A spokesperson for the Ashanti Regional Fire Command D03 Ackah Desmond mentioned the 200 flashpoints while speaking on Kumasi-based Akoma FM.

He mentioned areas like “Santasi, Adum, Kejetia and other areas within the central business district which have been flagged as fire-prone areas.

The fire command, however, says it is intensifying public education to enlighten the masses on safety tips and measures to fight the fire to ensure lives and property are protected.

Were you voted for proverbs or development? – Bawumia quizzes A.B.A Fuseini