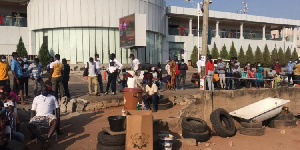 Voting has delayed at the Baba Congo Polling station in the Asawase Constituency in the Ashanti Region.

According to the EC official at the polling station, the validation stamp will come before they begin the election which was supposed to start at exactly 7 am.

However, other electoral materials have arrived and have been prepared and ready for the voting process.

Meanwhile, voters have been in queues since dawn to cast their ballot.

Asawase is one of the seats occupied by the National Democratic Congress in the Ashanti Region. However, the current Executives of the New Patriotic Party are looking at snatching the seat which has been for the NDC for a very long time.