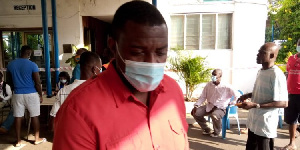 He is unhappy that electorates are made to cast their ballot even though the indelible ink was not included in the electoral materials that were delivered at that polling station.

John Dumelo feared that those who are made to cast their vote may engage in double voting as the indelible ink was an indication that one had voted.

“I’m disappointed in the process. We don’t have indelible ink here and they are allowing the process to continue which is wrong. I suggest that they stop the whole process, let them get the ink before we continue. The indelible ink is the only way to show that you’ve been able to vote,” he told UniversNews.