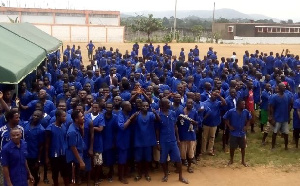 Inmates at the Akuse Prisons in the Lower Manya Krobo of the Eastern Region have been casting their ballots in Monday’s Presidential and Parliamentary elections where they have a chance, just as any other Ghanaian, to vote in a country where incarcerated people also have voting rights.

Presiding Officer at the first polling center inside the prison yard, Barbara Buadu said the 122 inmates, all males, are part of 212 registered voters who are voting at the Akuse Prisons Inmates polling center at Akuse today.

The polling center is divided into two parts with one set of election officials stationed in the prison yard with the other, positioned in front of the yard where members of the general public are currently voting.

Aside having the chance to decide who leads this country as President for the next four years, the inmates are equally deciding on who represents the constituency in the august house of Parliament.

Voting is expected to end at 5pm.