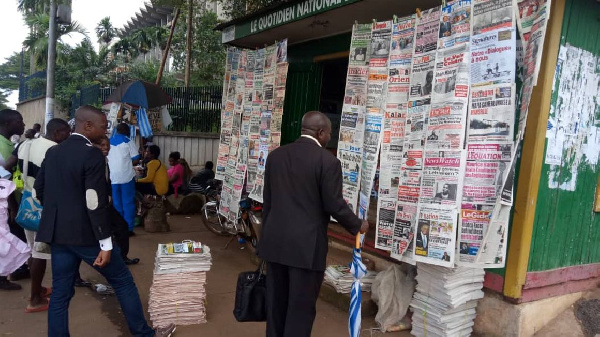 Journalists in Sierra Leone have heaved a collective sigh of relief following the repeal – after a gruelling 55-year struggle – of a law which had been weaponised by authorities to curtail press freedom.

Press freedom watchdog, the Committee to Protect Journalists (CPJ) described the repeal of the law as “a welcome step towards improving conditions for press freedom in the country.”

Last year, Liberia moved in the same direction with President George Weah saying the reforms conformed with international legal instruments to which the country is a signatory, and which demand that African countries abolish inflammatory media and other related laws.

While Sierra Leone and Liberia now join African countries where libel or slander is a civil and not criminal offence, journalists in Cameroon are still, in effect, caught up in a state-supported chokehold of their trade.

The country has seen a spike in arbitrary arrests and detentions, harassments and other forms of attacks on journalists for their work. Ahmed Abba, Radio France Internationale’s Hausa-language correspondent, who was accused of terrorism, spent 29 months in detention before he was released in 2017 and forced to go into exile.

Journalist Samuel Wazizi, whose legal name was Samuel Ajiekah Abuwe, died in military custody in Yaoundé in August 2019, but the military made his death public only on June 5, 2020, following pressure from many quarters. He was arrested in a township in the conflict-ridden southwest region of the country and accused of having links with armed separatists fighting since 2017 to create an independent Anglophone state, ‘’Ambazonia.’’ The government has labelled the armed separatists “terrorists.”

Wazizi was the second journalist to die in custody in the country in the past 15 years. In 2010, journalist Bibi Ngota also died in government custody, according to the CPJ.

At least six other journalists in the country, including Kingsley Fumunyuy Njoka, Thomas Awah Junior and Paul Tchouta are in jail.

Shrinking press freedom
Jude Viban, the national president of the Cameroon Association of English-Speaking Journalists (CAMASEJ), says he receives complaints daily from members about harassment, threats and intimidation by people with political power.

“Journalism as a whole and journalists across the world have the same problems of intimidation, threats and attacks because they work on sensitive issues. But in Cameroon, it is accentuated and more complex,” says Mr Viban. He blames the situation on laws which give little or no protection to media professionals.

“Individuals are a threat because if you get to the authorities who are supposed to be investigated, they will, because of their interest, stall the case or make it disappear or you are not just listened to. The blame is on you when you come complaining. The authorities already tag you as the one who did something wrong. That impunity does exist, and we must admit it does,” he explained.

“Journalists in Cameroon are born free, but everywhere they are in chains. We still have laws that tighten the lace of control around the neck of every journalist in the country,” says Mr Kini.

Although the preamble to Cameroon’s 1996 constitution guarantees both freedom of expression and of the press, libel and slander remain both civil and criminal offences. A guilty verdict can mean a prison term of up to six months and or a hefty fine.

According to Mr Kini, the criminalisation of press offences has affected the quality of journalism in the country, because it has forced journalists to exercise self-censorship.

Media scholars, journalism trainers and lawyers in the country also agree that current laws do not protect media practitioners.

Eugene Nforngwa, a Media and Development Researcher at the Yaoundé-based African Knowledge and Policy Centre (AKPC) argues that journalists do not enjoy any form of protection under the current Cameroonian laws.

Punitive legislation
Arrey Collins Ojong of Arrey & Associates Law Office, a lawyer who offers pro bono defence to journalists and other vulnerable persons, says he is profoundly alarmed about the current state of the media and journalists in Cameroon because the existing legislation is solely punitive.

Apart from the constitution and a few ratified conventions, which are hardly ever applied, authorities have done little to nothing to put in place legislation that protects free speech, press freedom and digital rights for citizens and journalists, Mr Arrey said.

“For instance, the Cameroonian Penal code still convicts individuals found guilty of defamation under its section 305 with an imprisonment of from six days to six months and with a fine of between FCFA5,000 and FCFA2 million,” Mr Arrey explained, citing it as part of laws that hinder press freedom in Cameroon.

The human rights lawyer says he was motivated to defend journalists when he saw how they were continuously being molested, beaten and detained without due process, simply because they were struggling to do their job.

“I witnessed an extremely risky atmosphere for journalists [in Cameroon] who remained the sole stakeholders to report and inform the common man on the day-to-day issues that directly touch on the lives and future of the people,” said Mr Arrey, who is also the National Vice President of Cameroon Humanitarian Lawyers Without Borders (Avocats Sans Frontières Humanitaires Du Cameroon).

“I was motivated to believe even journalists admired so much were an endangered species and required protection, thereby protecting free speech and the only source of this protection would be the law,” Mr Arrey explained.