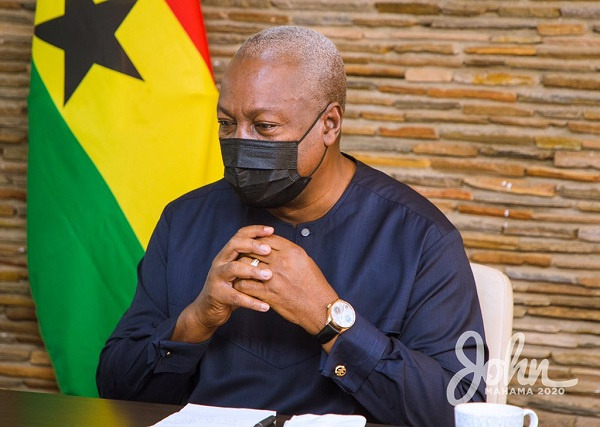 Former President John Dramani Mahama has said he will ensure that all those who lost their lives during the 2020 general elections and their families receive justice.

He indicated that there was no need for people to have lost their lives during the polls while exercising their franchise to elect a leader.

A total of 61 electoral and post-electoral incidents were recorded nationwide, the Ghana Police Service has announced in a statement on Wednesday, December 9.

The statement said 21 of the incidents are true cases of electoral violence, six of which involved gunshots, resulting in the death of five.

The statement further noted that there were several fake news about supposed electoral violence.

“However, between 0700 hours of 7th December, 2020 and 1000 hours of 9th December, 2020; the Joint Operation Centre of the NESTF has recorded a total of sixty-one (61) electoral and post electoral incidents nationwide. Twenty-one of the incidents are true cases of electoral violence, six of which involve gunshots resulting in the death of five,” the statement from the Police emphasized.

Speaking at the 39th celebration of the 31st December anniversary on Thursday December 31, 2020 in Accra, the Presidential Candidate of the National Democratic Congress (NDC), said “I stand here to salute the memory of those who died in this exercise.”

“It is a duty of any government to protect the lives of our citizens and ensure that no blood is poured as a result of people’s rights to choose their leaders. I assure and promise that justice will be done to them, and appropriate compensation given families,” he added.

Regarding the late former President Jerry John Rawlings, Mr Mahama said “My comrades, now is the time for us to remain committed and united to the cause of our party.

“How do we preserve the principles of the Revolution and the memory and legacy of our founder JJ FLT Rawlings for posterity?”

“He said, I prefer to be remembered in the hearts of men than by monuments and statues. And I believe that the only vehicle that can assure that he remains in the heart of men is the political party that he founded.”

Otumfuo’s Mpaboahene, 7 others cited for contempt of court over unlawful demolition

Rawlings preferred to be in the hearts of men than monuments, statues – Mahama