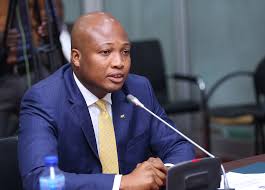 Samuel Okudzeto Ablakwa, the Member of Parliament for North Tongu has questioned the deployment of over six thousand police officers to the house for the swearing-in ceremony of President-elect Nana Addo Dankwa Akufo-Addo.

The Ghana Police Service on Monday, January 4, 2020 announced a tight and robust security plan for the ceremony which will be held at the august house.

The Service also asked the public to stay off the immediate vicinities of the Accra International Conference Center, the Accra Sports Stadium, the Black Star Square and the Entire State House Complex on January 6 and January 7 when the ceremonies will take place.

In a post on social media, Okudzeto Ablakwa said that the deployment of the staggering number of officers is an affront to the Standing Orders of Parliament.

He suspected the officers were being engaged to intimidate NDC members of Parliament who would want to carry out their ‘legitimate constitutional duties”.

He reminded the personnel that any attempt to cause harm or arrest any member of the house will be contempt of Parliament.

“What really is the essence of the needless, excessive, gestapo and despotic security deployment to Parliament House when our Standing Orders are clear in Order 30 …”

“Parliament as the bastion of democratic freedoms must at all times reflect what is beautiful about representative democracy devoid of ugly intimidation by threat of force which is the hallmark of tyrants and dictators”.

“Let those few service commanders impetuously pursuing misguided instructions be informed that per the Standing Orders of Parliament they are in contempt of Parliament and shall be in even more trouble if they attempt to arrest or molest any Member of Parliament as we carry out our legitimate constitutional duties”.

Okudzeto maintained that the NDC MPs will not be cowed by the intimidating tactics of the government.

“The people of Ghana including my beloved constituents of North Tongu did not vote for cowards. We refuse to be intimidated and we are determined to stand up against this affront to the dignity of Parliament and the good people we represent”.