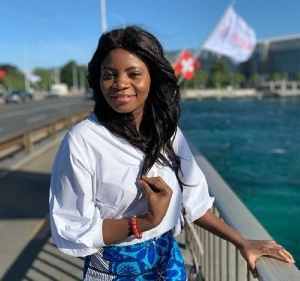 Youth, gender, peace and security advisor, Beatrice Baiden, has clarified that women, by fighting for equal rights are not exactly pitching women against men as people seem to perceive.

Speaking on eTV Ghana’s African Women’s Voices show with host, Eunice Tornyi, she noted that all that women are fighting for is “equal representation at the table when it comes to decision-making” and not to be seen as equal to men in every field or aspect of life.

“It is true that we have a lot more women who voted especially in this 2020 elections. According to the Electoral Commission website, women who voted this year constituted 51% as against our male counterparts and that’s good but what we’re saying is that let’s create a level plain field where we have women and men at the decision-making processes. When it comes to public policy, let’s have women’s input that is balanced. When it comes to the economic aspect, women should be able to earn the same amount of money that men do for the same work,” she said.

Beatrice admitted that Ghana does fairly well in the economic aspect as men and women tend to earn fair amounts of money depending on the amount of work done as compared to other jurisdictions. These imbalances, she said, need to be looked at.

She analysed from the fact that 51% of voters in the 2020 elections were women, that it makes it obvious that women want to be heard, however, the bigger question is that are these women who want to be heard actually at the decision-making table to contribute to the public policies that the country needs?

“If currently, we have 37 women parliamentarians out of 275 seats, is it a fair representation of the voices of women at the table? That is the discourse we’re having now and that is why most of the activists for affirmative action are pushing and saying that it is only fair that both men and women be at power when it comes to governance, our political system and public policies,” she added.

According to the gender activist, men and women are partners in the development process hence bring one party up and relegating the other party to the background, a gap is created that is not healthy for the development of the nation.