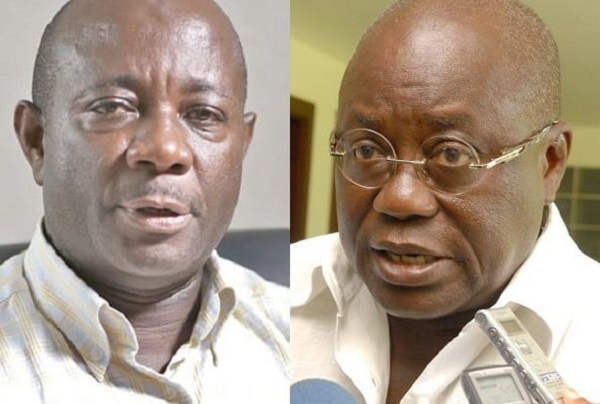 The Founder and Leader of the United Progressive Party (UPP) Mr. Akwasi Addai Odike has revealed that President Nana Addo Dankwa Akuffo-Addo fueled all the internal wranglings within the New Patriotic Party (NPP).

Former General Secretary of the NPP Kwabena Agyei Agyapong and Former National Chairman Paul Awentami Afoko were suspended indefinitely by the NPP’s disciplinary committee based on recommendations in October 2015.

Mr. Akwasi Addai Odike speaking on Kumasi based Abusua FM’s Morning Show hosted by Kwadwo Marfo monitored by MyNewsGh.com said President Akufo-Addo is behind the indefinite suspension of Paul Afoko and Kwabena Agyapong just to get control of the party.

According to Odike, President Akufo-Addo is pushing much effort to bring division into NPP and sideline all NPP gurus who can challenge his decisions.

“President Akufo-Addo has strategize to control the New Patriotic Party (NPP) and have an autocratic power in the party. He (Akufo-Addo) is against those who will challenge his decisions. Look at how he managed to sideline Kwabena Agyapong, Afoko and others” Odike said.

“Akufo-Addo told NPP leaders that he cannot work with MP for Akwatia Constituency Ama Sey because she was a hairdresser. Ama Sey fought hard to win Akwatia seat for NPP but because of President Akufo-Addo’s attitude, NDC has won the Akwatia seat from NPP”. He claimed.

Odike added that, “Majority of NPP MPs lost their seats in during 2020 general elections because President Akufo-Addo was not in a good terms with them. He treated Fomena MP who went to independent as an enemy because he wanted to remove the man from the party…