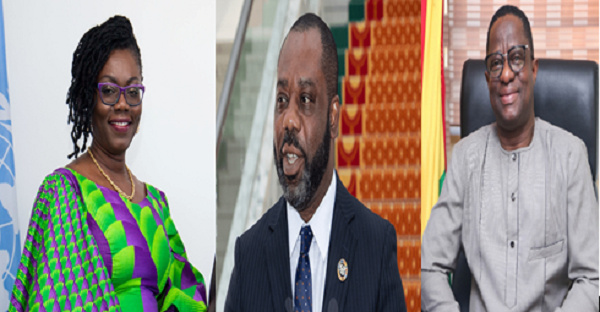 The old is gone; all is set for new ministerial appointments. What will comprise this new administration and what numbers are we looking at?

Rumours are so far rife about a possible pruning of the previous administration comprising of 110 ministers and the number projected for this one is 70.

Of course, considering the general order of things, the poorly-performing ministers are more likely to be dropped whilst new ones are appointed to replace them.

According to a Dailyguide newspaper report, former Education Minister Dr Matthew Opoku Prempeh (Napo) may be swapping roles with John Peter Amewu who served as Energy Minister whilst Mr Amewu who is now the Hohoe MP moves to the Railways Ministry as substantive Minister.

This will leave Mr Opoku Prempeh’s position for his former Deputy, Dr Yaw Osei Adutwum who was quite cooperative with the administration of his duties in his previous capacity.

Dan Botwe who was iconic with the reorganization and establishment of the 6 new regions as Regional Reorganisation and Development Minister is likely, per DailyGuide’s report, to be moved to the Ministry of Local Government and Rural Development which was previously occupied by Hajia Alima Mahama.

Samuel Atta Akyea who was Works and Housing Minister may be moved to the Environment Ministry as its Minister.

For those who particularly left distinctive marks after their first term, they have been projected to retain their various ministerial appointments.

It is still unknown, however, what the fate of Attorney General, Gloria Afua Akuffo will be moving forward; whether or not she will be maintained or if there even is any possibility of her being replaced by her deputy Godfred Dame who has become more popular in recent times.

Who are the new faces we are likely to see? Again, per DailyGuide’s sources, Director-General of the Ghana Health Service, Dr. Anthony Nsiah-Asare, who has been at the frontline of fighting the Coronavirus has been projected to occupy the Health Minister, Kwaku Agyeman Manu’s position as substantive Minister.

Chief-of-Staff, Akosua-Frema-Osei Opare though has been projected to retain her position, is likely to work with some new faces including former NPP General Secretary, Kwabena Agyapong and Michael Ofori-Atta, a diplomat, as Deputy Chiefs-of-Staff.

Nana Bediatuo Asante who was secretary to the President is likely to retain his position.

Meanwhile, the President, Nana Addo Dankwa Akufo-Addo has dissolved his previous conclave of ministers and selected acting ministers who will oversee business in the interim, until new ministers are nominated, vetted and appointed.

The action is in accordance with the Presidential Transition Act, 2012 (Act 845), to avoid gaps in running state affairs.

These ‘caretaker’ ministers, however, will not be making new policies nor engaging in financial engagements.