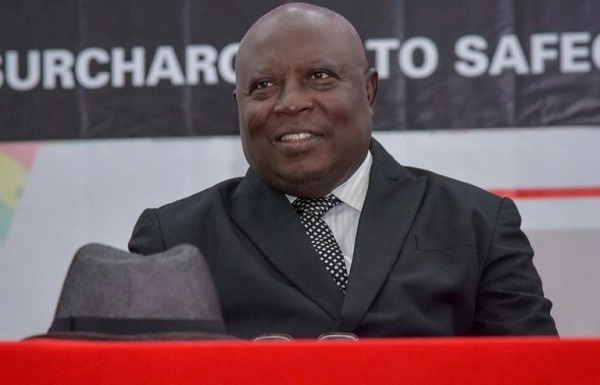 The President, during a press conference at the Flagstaff House said, “I have accepted the Attorney General’s nomination, and will, in turn, submit for Parliament’s approval, when it reconvenes on 23rd January, 2018, for its first meeting of this new year, the name of Martin Alamisi Burnes Kaiser Amidu to be the first Special Prosecutor under the law”.
The President described Martin Amidu as a man who has the “requisite integrity, competence, courage and independence of character to discharge effectively the responsibilities of this new office.”

Meanwhile, Martin Amidu in November 2020 resigned from his position as the Special Prosecutor.

According to him, he had a “traumatic experience” between October 20 to November 2, 2020 after releasing his corruption risk assessment on Agyapa Royalties Limited transactions.

Read the full story originally published on January, 2018 by todaygh.com.

President of the Republic, Nana Addo Dankwa Akufo-Addo, has nominated Martin Alamisi Burnes Kaiser Amidu as the Special Prosecutor, subject to the approval of Parliament.

According to President Akufo-Addo, the Attorney General, Gloria Akuffo, by letter dated Thursday, 11th January, 2018, exercised her power of nomination, and submitted to him, for his acceptance, the name of Martin Amidu as the proposed Special Prosecutor.

“I have accepted the Attorney General’s nomination, and will, in turn, submit for Parliament’s approval, when it reconvenes on 23rd January, 2018, for its first meeting of this new year, the name of Martin Alamisi Burnes Kaiser Amidu to be the first Special Prosecutor under the law”, the he added.

President Akufo-Addo made this known on Thursday, 11th January 2018, at a press conference, at the Flagstaff House.

The President told the media that the appointment of Martin Amidu as Special Prosecutor is because he is fully convinced that Mr Martin Amidu, “a prominent legal personality, who held the high office of Attorney General of the Republic in the government of the late President Prof. John Evans Atta-Mills, has the requisite integrity, competence, courage and independence of character to discharge effectively the responsibilities of this new office.”

President Akufo-Addo recounted the commendation given by the Supreme Court to Martin Amidu for his public spiritedness in the case of Amidu vrs Attorney-General, Waterville & Wayome [2013-2014] 1 SCGLR 112 @ 166.

It will be recalled that in that judgement, per the respected Judge, Dotse JSC, the Supreme Court stated that “…The role of the Plaintiff, Martin Alamisi Amidu, a distinguished former Attorney-General of this country, needs to be highly commended as was done in the lead judgment of the court. The Plaintiff, in my opinion, must be highly commended for his vigilante role in protecting the wanton dissipation of the public purse…”

The Court also, in a related suit, had this to say about Martin Amidu: “… the Plaintiff (that is to say Mr. Amidu) is to be commended for his public spiritedness which has fuelled his meticulous and industrious presentation of this case…”

President Akufo-Addo told the gathering that he could also, personally, vouch for the public spiritedness of Mr. Amidu.

“We were on opposite sides in a series of landmark constitutional cases in the period leading up to and in the early years of the 4th Republic, well known to students of constitutional law, which helped shape the evolution of the Constitution of the 4th Republic. As Deputy Attorney General, as he then was, he conducted those cases with the fairness which should be a cardinal feature of the conduct of any self-respecting lawyer,” he said.

The President noted further that Mr. Amidu has indicated his willingness to accept the appointment as Special Prosecutor.

“I, thus, have the honour to submit to Parliament, when it reconvenes, the name of Martin Alamisi Burnes Kaiser Amidu, for its approval for appointment as Special Prosecutor,” the President said.

He was hopeful that the praiseworthy speed and dispatch, with which Parliament acted on his nominees for ministerial appointment last year, will characterise its handling of this nomination to enable Mr. Amidu, as soon as possible, enter into office to begin the important work that awaits him.

“I congratulate him on his deserved nomination, and wish him Godspeed in the valiant efforts he will undoubtedly be making to enhance the quality of governance of our country. The Ghanaian people will be the beneficiaries of that,” the President concluded.

2 grabbed for attempting to smuggle ‘wee’ into prison