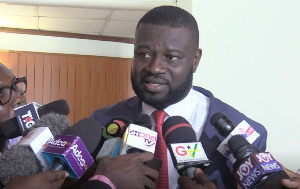 Chief Whip of the NPP caucus in Parliament, Frank Annoh Dompreh, has sent a strong indication to the NDC caucus that it is equally ready for the showdown on who becomes Majority and Minority

He was reacting to a post made by the National Democratic Congress Member of Parliament for Builsa South, made a post on Facebook assuring the public that it is ready to resist any force by the NPP to remove them from the righthand side of the Speaker.

Clement Apaak wrote: “Folks, be assured that we are ready. If the NPP side decides to forcibly remove us from the right-hand side of Mr Speaker on Friday, we will be ready. Very ready. Let no one be deluded. We expect this matter to be resolved by leadership on the basis of law and our standing orders, nothing more nothing less. Talk is cheap, very cheap. In Solidarity!”

But the MP for Nsawam Adoagyir, Frank Dompreh, has said that his side of the House was confident and without a doubt that their bid to maintain the Majority status in Parliament although the current numbers put both sides in a hung position, will be confirmed tomorrow.

He expressed such confidence after the MP for Fomena, and Second Deputy Speaker of Parliament, Andrew Asiamah Amoah, wrote a letter to the Speaker indicating his wish to officially caucus with the NPP.

Ghana’s Parliament has, for the first time, been left hanging after seats in the House from the 2020 elections split it into 137 seats each for the NPP and the NDC. However, there is one other independent candidate in the house.

Although the Speaker of Parliament, Alban Sumana Kingsford Bagbin, will officially announce who will sit on which side of the House tomorrow, January 15, 2021, there is the indication that the choice of the Fomena MP will be crucial in that decision.