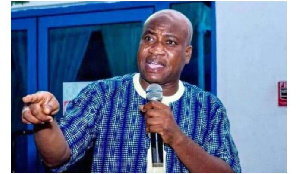 NDC MP for Tamale Central, Ibrahim Murtala Muhammed has expressed his shock at how little people are talking about what Ursula Owusu did to Collins Dauda on the floor of Parliament on the morning of January 7, 2021.

According to the MP, all discussions surrounding happenings on the day have been little or nothing on what transpired between the NPP MP for Ablekuma West, Ursula Owusu-Ekuful, and Collins Dauda, MP for Asutifi South.

Parliament was thrown into chaotic scenes after members participated in a secret voting exercise in Parliament to elect the Speaker for the 8th Parliament after MP for Tema West, Carlos Kingsley Ahenkorah snatched ballot papers and attempted to bolt.

The happening threw Parliament into chaos for long minutes, bringing proceedings in the House to an unplanned pause during which time tensions rose and tempers flared among members.

Before that, the NDC members in the House took over seats on the right-hand side of the Speaker which is reserved for the Majority members, much to the furor of the NPP members who entered the Chamber later.

At a point during the debacle, Ursula was seen sitting on another MP from the NDC side of the House, who appeared to be sitting in her original seat.

This scene heightened the tensions and soon, the Ablekuma West MP was seen on the floor, followed by verbal exchanges between her and a few other MPs.