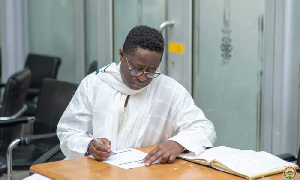 As many as sixteen suits have so far been filed as the NDC and the NPP caucuses attempt to improve their fortunes in parliament.

He said “It’s a game of strategy and that for me is exciting, lets see how they play it out. So, far as it’s peaceful and legal, there’s nothing wrong with that. We are testing our democracy in that respect. So, if we come out of this successfully without any injuries to anybody then we have succeeded because democracy is strengthened through such tests.

He further intimated “if you don’t test it you don’t know whether it would work or not. So, what we are doing is building up our repertoire of democratic practices. If you succeed with all these litigations and in the end, the two parties are satisfied that the court has decided and this is what it is and we live by that, we would have really achieved that for our democracy..”