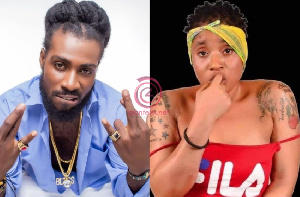 A lot of accounts have been given following the death of Ama Broni, a Ghanaian Slay Queen who passed on at an event venue in Kasoa.

Earlier reports said she was unrulily fondled after she went naked on the stage to twerk.

In the wake of this, a musician who was performing before the deceased mounted the stage has shared his side of the story.

Speaking in an exclusive interview with ZionFelix on the ‘Uncut’ Show, Original Shana stated that he wanted to charge the crowd so he announced that he needed someone to twerk.

Since he was performing his ‘Yiwo Dross’ song which featured Patapaa, he announced that he needed someone who can remove [his/her] underwear and twerk for $100.

According to him, a guy first showed up for the challenge before the lady appeared on the stage.

Shana revealed he was shocked when Ama Broni went completely naked to twerk on the stage.

The enterprising musician clarified that he was not expecting anyone to go such an extra mile of showing her nude.

Shana, who was stunned at that moment, said he asked the DJ at the event to “pull up” and made sure Ama was safe on the stage.

However, Shana couldn’t give a vivid account of what really happened when Ama Broni went off the stage — his account was based on hearsay.

From what he heard, the deceased tripped when she was using a staircase.

Sadly, Shana added that Ama Broni was electrocuted when she fell—based on what he heard.

He stressed that he is not responsible for her death and he didn’t see anyone harassing her sexually.