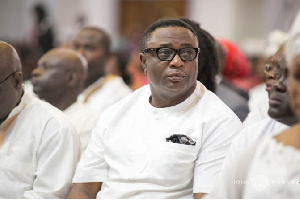 The late former President Jerry John Rawlings used state resources to serve the people of Ghana when he was the head of state, Director of Elections for the National Democratic Congress (NDC), Elvis Afriyie Ankrah, has said.

He told TV3’s Komla Adom after filing past the remains of the late Founder of the NDC at the Accra International Conference Centre on Monday, January 25 that Mr. Rawlings never acquired wealth at the expense of Ghanaians.

He said the former military leader doesn’t have houses spread across the country as some critics claimed.

“Rawlings came into politics to serve the society, he used state resources to benefit the people,” he said.

He added “Rawlings provided water extended electricity several rural areas across the country. Where are Rawling’s houses in Ghana? Where is his secret bank account people he claimed he had?”

He further called on Ghanaians to live by the probity and accountability, principles of Mr. Rawlings.

“These are values that have come to stay, So when people come into politics they should use the state resources to serve the people.”

The Metropolitan Archbishop of Cape Coast, Gabriel Palmer-Buckle, has told Ghanaians to live by the principles of probity, transparency and accountability crusade that the late former President Jerry John Rawlings stood for.

He said this is the best way to remember the late Founder of the National Democratic Congress (NDC).

Delivering a sermon during a requiem mass held for the late former President on Sunday, January 24, Palmer-Buckle said “Now is the time to look with different and unbiased eyes at his personal crusade of probity, transparency and accountability.

“Let us take oaths today in the presence of God to work conscientiously to establish these virtues of probity, accountability and transparency in our own individual lives and in the social and political life and service of our country Ghana.

“This will be the most worthy legacy and monument we can build to his name.”