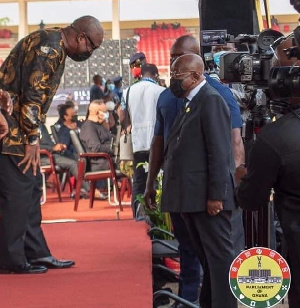 President Nana Akufo-Addo and his predecessor John Dramani Mahama have been pictured at the funeral of Jerry John Rawlings showing mutual respect to each other despite their ongoing court case.

At the funeral of Jerry John Rawlings who was buried in Accra on Wednesday, Nana Akufo-Addo walked to Mr Mahama to exchange a few pleasantries before leaving the Black Stars Square where the event took place.

In what looked like a quick yet good conversation, the two men are seen intensely focused and listening to each other.

While the details of their conversation are not public knowledge, It is yet another testament of Ghana’s growing democracy.

As many already know, former President and presidential candidate of the NDC in the 2020 general elections, John Dramani Mahama is yet to officially concede to Nana Akufo-Addo after the NPP flagbearer was declared the winner of the last election by the Electoral Commission of Ghana.

Mahama argues that the declaration by the EC is not a true representation of the electoral figures and has since proceeded to the Supreme Court to challenge the declaration of Nana Addo as President and winner of the 2020 elections.

What is Mahama seeking from the Supreme Court?

The petitioner, Mr Mahama, is seeking a rerun of the December 7, 2020 elections between himself and Nana Addo Dankwa Akufo-Addo of the New Patriotic Party (NPP) because he believes both leading candidates did not obtain 50 percent of the valid votes as required.

His petition is based on the results declared by Jean Mensa, the Electoral Commission Chairperson on 9 December.

Mr Mahama is also seeking the following reliefs in his petition.

1. A declaration that EC Chair Jean Mensah’s declaration of the election results on December 9, 2020, was in breach of Article 63 (3) of the 1992 constitution.

2. That based on the data contained in the declaration, no candidate satisfied the requirement of the stated Article, to be declared President-elect.

3. A declaration that the declaration is unconstitutional, null and void, and of no effect whatsoever

4. An order annulling the Declaration of President-Elect Instrument 2020 (c.I. 135) dated 9th December 2020, issued under the hand of the EC Chair.

5. An order of injunction restraining Nana Addo Dankwa Akufo-Addo from holding himself out as President-elect;

6. An order of mandatory injunction directing the EC to conduct a re-run of the election with he (Mahama) and Nana Addo Dankwa Akufo-Addo as candidates.

Amina Rawlings breaks down during emotional tribute to late father