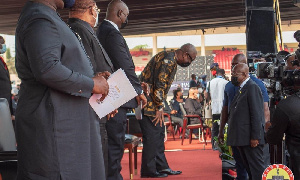 Broadcast Journalist with the Despite Group, Afia Pokua- known widely as Vim Lady- has reacted to a viral photo of the former President of Ghana, John Dramani Mahama, bowing to Nana Addo Dankwa Akufo-Addo at the funeral of the late former President Jerry John Rawlings.

John Mahama has received plaudits for the gesture by many on social media considering the fact that although he is challenging the results of the 2020 election, he respects the president.

Reacting to the photo, Afia Pokua indicated that it’s high time party footsoldiers who are not entitled to any exgratia learn from John Dramani Mahama’s gesture and realize that politics is not about insults but an exchange of ideas.

I had to break my silence on Facebook because of this picture. Though President Mahama is fighting 2020 election RESULTS in court and we DON’T know whether he will win or not, look at how he shows RESPECT to President Akufo-Addo.

If you don’t LOVE Mahama for this then I don’t what you want. AFTER ALL THE GIDIGIDI THIS IS WHAT MAKES GHANA ONE OF THE BEST PLACES ON EARTH. We will fight and insult but we know the GHANA in us.

One day I pray FOOT SOLDIERS will mature like this though they will never get EX GRATIA. Show President Mahama some fans because even Donald Trump could not do this President Akuffo Addo, thank you for giving President Rawlings a befitting burial.RIP Togbuiga PAPA J*PLEASE NO INSULTS.”