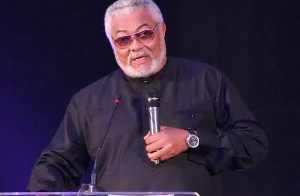 A member of the New Patriotic Party (NPP) communication team, Raphael Sarfo Patrick, has blamed the death of the late former president, Flt. Lt, Jerry John Rawlings, on the perceived bad blood that existed between him and some elements of the NDC.

It was no news that in the last years of the former president’s life, rumors were rife that he and some party functionaries were no longer seeing eye to eye, even to the extent that it was believed that he was being pushed out of the party.

This, according to the NPP’s Ashanti region communicator, contributed to his death.

“The inhumane treatment, disrespect, and insults by the babies with sharp teeth might have caused the death of J.J Rawlings,” he said during his appearance on Kumasi-based Akoma FM, monitored by MyNewsgh.com.

He explained further that the National Democratic Congress, a party that was formed by the late president, got to a point where they no longer showed respect to their founder, more so when he was alive.

He, therefore, stated that the tributes and testimonies from them now, after he is now dead and gone, raises questions on whether they are genuine or not.

“I believe if NDC as a party accorded their founder with some respect, Rawlings could have lived more years. Rawlings himself wasn’t happy with his own people because he was not being treated well,” he explained.

Flt, Lt. Jerry John Rawlings was laid to rest at the new Military Cemetary in Accra on Wednesday, January 27, 2021, after a four-day ceremony in celebrations of his life and death.

He died at the Korle Bu Teaching Hospital on Thursday, November 12, 2020, after a short illness.

Hydrogen peroxide in short supply due to panic buying – FDA