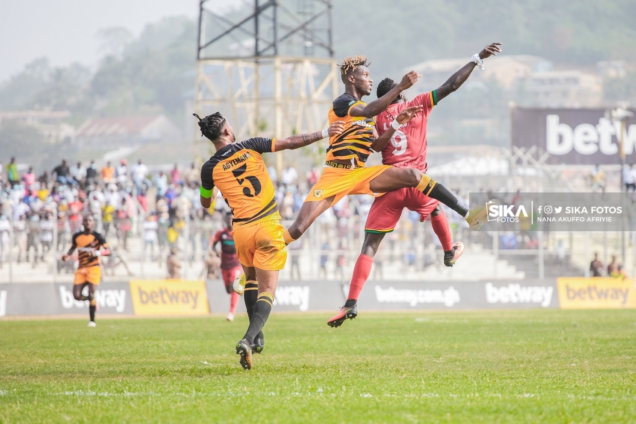 AshantiGold and Asante Kotoko failed to find a way past each other as the Ashanti derby ended in a goalless draw at the Obuasi Len Clay Sports Stadium on Sunday.

The two teams went into the tie 16 points apiece and a victory for any of them could have granted a second place on the Ghana Premier League table.

AshantiGold goalkeeper Bailou Mohammed was called into action in the 9th minute. He denied a goal-bound effort from in-form Kotoko striker Kwame Opoku.

Bailou made another save in the 18th minute. This time, it came from Ismail Ganiyu’s strike.

The Miners tried to make things happen in the first period but it was Kotoko who looked more likely to score.

In the second half, Ganiyu made a beautiful tackle at the other end, stopping a dangerous run from David Abagna in the 52nd minute.

The biggest chance of the game fell to Kwame Opoku in the 86th minute. His low driven strike missed the target after he smartly beat AshantiGold’s offside trap.

The last two battles between the Ashanti regional teams have ended in goalless draws.

The Porcupine Warriors are yet to beat the Miners away from home since February 2017.

Kotoko are 7th on the log and AshantiGold are two spots above them.

Also on Sunday afternoon, WAFA produced a five-star performance to annihilate Liberty Professionals 5-0 in Sogakope. WAFA scored all their goals in the second half.

Karela United remained top of the table with a 2-0 win over Medeama. After a barren first half, Kwame Boateng and Diawise Taylor scored in the second half to secure three points for Karela to stretch their lead at the top to two points.

Elsewhere in Accra, Legon Cities moved out of the relegation after securing a second straight win. They beat regional neighbours, Inter Allies by a lone goal scored by youngster Mathew Anim Cudjoe.

Aduana Stars and Ebusua Dwarfs drew 2-2. The same scoreline was recorded in the fixture between Elmina Sharks and Dreams FC.

Partey: Why did Arsenal star fade spectacularly against Manchester United?