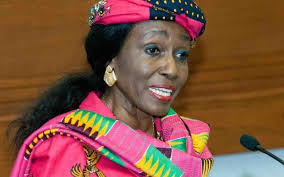 The wife of Jerry John Rawlings, Nana Konadu Agyeman-Rawlings, has said she had to learn a lot when she met the former President, including coping with his friends, but she could not and her late husband called her “snooty” which is the show of disapproval or contempt towards others, especially those considered to belong to a lower social class.

Many had lamented, how the Great JJ Rawlings ostracized most of his friends, acquaintances, family members, political comrades, military colleagues among others and suffered loneliness while in office and many years after his 19 years rule.

It has been reported that, that Mr Rawlings died a lonely man, and the widow’s tribute read on her behalf by one of their daughters, Princess Amina Agyeman-Rawlings, has provided an insight into the couple’s life.

Close family sources, have claimed that there was no marriage at the time of Rawlings’ death, and that the couple lived separate from each other and only met for social functions like state events, and went to their individual residences.

Whilst, Nana Konadu was said to be living at Adjiriganor near East Legon in Accra, Mr Rawlings mostly spent time at Vume near Sogakope in the Volta Region at the banks of the Volta Lake.

Rawlings’, an Ewe, had traditional rulers from his ethnic group staying away from his burial and funeral service because of confusion between his widow and mother’s family.

In the tribute, Mrs Rawlings, admitted that she and her husband “started on a journey that was free and easy in spirit.”

She disclosed that when she met Mr Rawlings, she was green and there was a lot she had to learn about real life, considering the fact that she had overprotective parents.

“I was innocent and you were streetwise. There was so much I did not know and understand about the real-life outside the wings and home of Mr and Mrs. J.O.T. Agyeman, since I had lived a very protected life under their roof.”

“I had to learn to understand how to be streetwise,” she added.

She had to adjust herself to his kind of lifestyle which conflicted with how she was raised.

“…move along with the flow of your friends and acquaintances, but it still did not sit well with me. It went against all the upbringing I had intensely received under the roof of my parents.”

Unable to fully adapt to the “streetwise” lifestyle, Mrs Agyeman-Rawlings, decided to remain true to the values her parents inculcated in her.

“After several trials, I decided a leopard never changes its spots. I was who I was based on family values. I decided I could not change for the sake of love. You finally understood me. To take me as I am. I was who I was and there was nothing I could do about it.”

“You sometimes called me snooty. I refused to accept that. I said it was based on my values,” she added.

The biography of the late Flt Lt Jerry John Rawlings, which was read by one Eric Gbeho during the final funeral ceremony at the Black Stars Square in Accra, revealed that the late former President, worked to bring governance close to the people.

“Jerry Rawlings brought governance to the people,” Gbeho said, among other things.

He added, “He encouraged citizens to participate in local governance.”

Interestingly, Nana Konadu, is now friends with the President, Nana Akufo-Addo, who just like her, had a privileged upbringing and sometimes seen as “snooty”.

Meanwhile, Secretary of the Funeral Planning Committee of the Anlo Traditional Area, Agbotadua Kumassah, has said the state will have itself to blame for the repercussions that will follow their failure to allow for the final funeral rites of former President, Flt. Lt. Jerry John Rawlings to be performed by Chiefs from his hometown.

According to them, much as Mr Rawlings served in many capacities; as a military man, father, and a statesman, he also had traditional responsibilities as an enstooled chief.

Speaking to GhanaWeb in an exclusive interview, Togbi Kumassah, explained that the former President, having been enstooled in 2016 as Nutifafa Fia (Peace Chief), underwent some rituals which included taking an oath as a Chief.

This oath, according to him, ought to be withdrawn, only after which someone else can take that oath and be enstooled in his stead, following his demise.

“…If funerals are not observed, it is very difficult to put another person on the stool because the installation rites of a chief involve swearing of an oath and that oath must be taken back when the person passes on and that would have been done for the late president so that someone can be enstooled in his stead.

“Now that that rite was not performed, it will be impossible to enstool another person to succeed him and if that oath is not retrieved, the repercussions will be on the state,” he noted.

According to Agbotadua Kumassah, the local funeral planning committee was expectant that as requested from the state, the mortal remains of Mr. Rawlings would have been brought back to his hometown after the state burial, for the final rites and burial by the chiefs but this was not realized.

Despite this he says, there has been a scheduled meeting between the extended family of Mr Rawlings and the Anlo Traditional Council, to deliberate on the way forward, as far as holding a burial to complete the said rites are concerned.

“Until the afternoon of 27th, we were optimistic that the body will be released to u; it was until the body was buried that we realized that we will not have the body.

“There should be a ceremony where the oath sworn to him will be taken back by the state, that is why it is very important to discuss the way forward on Saturday, how they will retrieve that oath will be very central at that meeting.

“So the chiefs are meeting, at the Avadada’s palace, to consider the next line of action, I’m very sure it will be discussed at that meeting whether there should be a traditional funeral or we leave things as they are,” he concluded.

Flt. Lt. Jerry John Rawlings, passed away on November 12, 2021, after a short illness in Accra. Aside from being a family man with 4 children whom he had with his childhood sweetheart, Nana Konadu Agyeman-Rawlings, he also served as a statesman and served in the Ghana Air Force, where he rose to the rank of Flight Lieutenant.

The former President was enstooled at a mini Hogbetsotso festival durbar held in Tadzewu to herald the grand durbar of the chiefs and people in Anloga.

The president did not say that marriages are banned – Oppong-Nkrumah