Samuel Koku Anyidoho, the former deputy General Secretary of the National Democratic Congress has made his first public statement after he was suspended from the party. 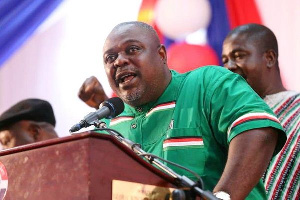 The NDC on Tuesday announced that it has placed a temporal ban on Anyidoho’s membership of the party.

The statement which was signed by Johnson Asiedu Nketia, the General Secretary stated that the decision was to allow for considerations into two separate petitions demanding the outright dismissal of Anyidoho.

In a Twitter post, Koku Anyidoho did not make reference to the statement but said “nothing shall limit the greatness of my destiny because the battle is the Lord’s”.

Meanwhile, Sammy Gyamfi, the National Communication Officer of the NDC has served Anyidoho some hope that his membership could be restored if he convinces the party’s Disciplinary Committee that the allegations are against him baseless.

He stated that ‘no one is above the party’ and that Anyidoho is not the first person to be suspended by the party.

“This is not the first time we are applying the process. We don’t discriminate in our party so you are a flagbearer and you deserve to be punished you will be punished. There have been people who have been punished,” Sammy Gyamfi said on Asempa FM.

He added, “No one is above the party, we’ve suspended the General Secretary before, Josiah Ayee, Allotey Jacobs also suffered the same thing.”

“If you fail to meet the committee and you tell your story, they can decide to lift the suspension or expel you from the party. Every party has its own rules. These are articles in our constitution,” he stated.