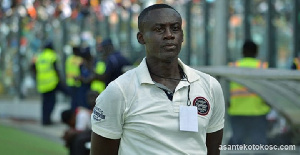 The Porcupine Warriors lost 2-1 to the Algerian giants at the Accra Sports Stadium on Sunday.

Kotoko is on the brink of elimination after losing the first leg.

Analyzing the team’s defeat on Happy 98.9FM, he said, “Kotoko couldn’t concentrate tactically until the end of the game.

The Star Madrid coach also gave Kotoko some tips on what to do to win the second left.

“In our away game they should take their chances and try get a clean sheet. Our problem is consistency. The Setif side had that in their set-up they were much organized. Kotoko lacked that, always changing players. If you are not consistent it will be difficult to play against a side that is consistent”, he concluded. Kotoko will have to overturn the results in the second leg to enhance their chances of progressing to the next round.

Covid-19: Kwahu West police run out of charge sheets due to numerous arrests