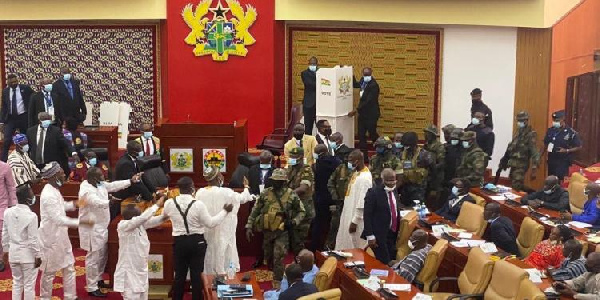 A Member of the New Patriotic Party’s (NPP) National Communications Team, Dr. Francis Kyei, says the military intervention in the chamber of parliament during the election of a speaker was in order.

According to him, at some point, a superior force was needed to come into the situation to calm nerves and restore order in parliament to allow the election to proceed.

The military personnel stormed parliament on 6th January to restore order while chaos broke out over the election of Speaker of Parliament.

The heavily armed personnel were, however, chased out by some MPs who chanted the national anthem while some MPs were seen speaking to the military to move back.

Speaking on Atinka TV’s morning show, Ghana Nie, hosted by Ekourba Gyasi Simpremu, Dr Kyei who is an Ex-Military Officer in the United States of America (USA) recalled how the military in the US was used to restore calm when rioters invaded Capitol Hill.

“On the night of the election of the speaker, the same thing happened in the US and the military had to come in to beef up support and calm nerves. When the situation escalates to a certain level, there is the need for intervention,” he said.

He added that “Even though their assignment is national defence, when they come in, it is not to wrong and they did not brutalise anybody. They came as a stronger force, they only came to restore order.”

He debunked the notion that there could have been a coup d’etat when the military invaded the chamber, saying that coup d’etat is a strong word and therefore was not possible considering the circumstances at the time.