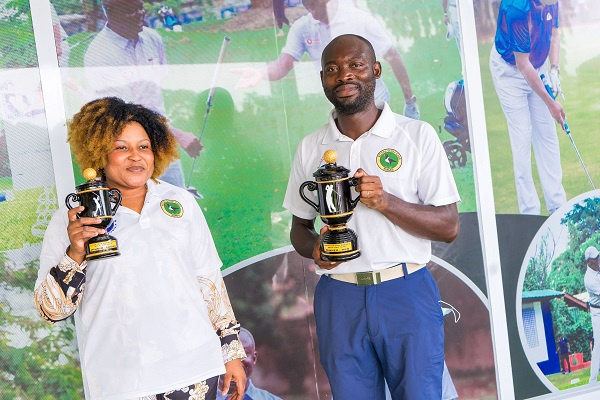 For the third successive year, the winners of the Latex Foam Masters Championship were first-timers. The 2020 edition, played on 6th and 8th March 2021 over 36 holes, was won by George Antwi and Vivian Dick.

George Antwi returned a net score of 72 on the second day to overturn a 3-shot deficit in the first round to the eventual runner-up of the event, Thomas Annan.

George, playing off handicap 19, returned a net score of 68 in the first round to place second to Thomas Annan’s impressive return of 65 net, off handicap 07, and 77net on the final day.

The final position in the men’s category, 5th, went to veteran and Grandmaster, Hayez Hage with a total score of 145 (beaten on countback).

The Ladies category saw Vivian Dick (handicap 16) winning on technical grounds after Defending Champion, Constance Awuni (Handicap 08), who won on countback, returned her signed scorecard without her handicap. Both Vivian and Constance returned a total net score of 149 over 36 holes.

In the Professional support event played over 36 holes played on 6th and 7th March, Maxwell Owusu-Bonsu returned a score of 73 (+1) on each day to finish at 146 (+2) to take the first position. He was followed by Kwabena Poku who returned an impressive 70 (-2) on the first day only to crumble on the final day with a score of 80 (+8) to finish at 150 (+6). Veteran Paul Nyarko returned a total score of 155 (+11) to take the final position of 3rd in the professional support event which was opened to Kumasi golfers only.

This year’s event was played in strict compliance with covid-19 protocol and hence there was no presentation ceremony. Winners picked up their prizes at the clubhouse after the championship results were posted on the club’s official WhatsApp platform and master scoreboard.

In a message sent to the club on behalf of the Sponsor, Latex Foam, Ms Gloria Poku, the Brands Manager at the Kumasi Branch recounted the many years of continued support to the club by Latex Foam. She further indicated her appreciation for the cooperation received from the management of the club over the years, especially when it comes to the organisation of events such as the Latex Foam Masters Golf Championship.

She used the opportunity to officially confirm the renewal of sponsorship by Latex Foam till the end of 2022, proof of satisfaction of the mileage received from the sponsorship.

At a separate ceremony, a special presentation, initiated by Mr Fayez Hage, was made by the Management of Latex Foam to Prof Baiden for his sterling contribution to the management of golf, especially at the Royal Golf Club, Kumasi. The presentation was to motivate and reward him for all the unseen hard work and background planning and execution of events at the club.

The Management of the Club, through the Head of Operations, Prof Bernard Baiden, highlighted the importance of the partnership between the club and Latex Foam as clearly demonstrated by their continued sponsorship and the club’s continued recognition at all events hosted by the club. Prof Baiden appealed to golfers at the club and the general golfing fraternity to patronize the outstanding mattresses, sofa, furniture and other products made by Latex Foam.