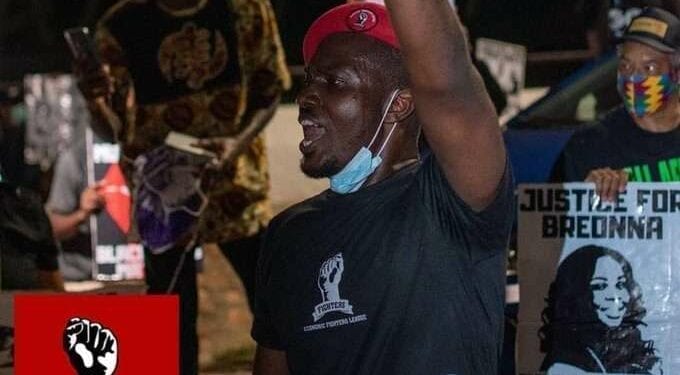 A collation of local and international groups that identify themselves as friends of Ghana has written an open letter to the president, Nana Addo Dankwa Akufo-Addo, expressing their displeasure at the ongoing prolonged prosecution and what they describe as an unfair treatment of Ernesto Yeboah, Commander in Chief of the Economic Fighters League.

Mr. Yeboah was arrested on June 6, 2020 during a vigil organized by the Economic Fighters League in solidarity with those around the world who were spontaneously displaying their anger, disgust and dismay following the highly-publicized brutal killing of George Floyd in the United States of America by police.

The 19-member coalition are as puzzled following the case and they wonder exactly what Ernesto Yeboah is being prosecuted for.

“Whatever the motivations for the ongoing prosecution, Ghana is not being served well because of it. In some quarters we are being exposed to ridicule because it directly contradicts our own efforts to build on our Pan-Africanist history and reputation. You and your government have attempted to solidify this reputation with various acts and statements during the last several years. For example, initiatives like the “Year of Return” and the granting of Ghanaian nationality to Africans from the Diaspora have helped project Ghana in a positive light on the African continent and abroad”, the letter read in part.

On the evening of his arrest, Ernesto Yeboah together with members of the Economic Fighters League and some members of the public were holding the vigil at the entrance to the Black Star Square in Accra when a joint police and military team arrived at the venue, fired some shots and broke up the gathering. The security forces then arrested Ernesto and accused him of violating Covid-19 safety protocols and disobeying the Public Order Act, 1994 (Act 491).

Section 1(1) of the Act says that, “Any person who desires to hold any special event within the meaning of this Act in any public place shall notify the police of his intention not less than 5 days before the date of the special event.”

Ernesto Yeboah denied the allegation of flouting the law with proof of a letter he had written to the police, informing the service of the intended vigil.

On the allegation of breaking Covid-19 protocols, again, there was proof that the vigil was attended by 67 participants, 43 short of the 100 people permitted to gather as permitted by Executive Instrument 64 (EI 64), an Instrument that limit the number of people at social gatherings and restricts certain activities, all aimed at preventing the spread of Covid-19.

The collation in the letter expressed worry that “many in the Ghanaian community see the continuing pursuit of this criminal case as an attempt to deter any future public expression of a similar nature.”

According to Mr. Yeboah, upon his arrest, he was taken to the Accra Central Police Station and for 14 hours, he sat through the night with no one to read out the charges on which he was being held. No explanation whatsoever during this time was given him for his detention, he said.

For ten months since his arrest, Ernesto has been in and out of the court as frequent as the power goes off in the suburbs.

Many have accused the authorities of hypocrisy as the government through the Ministry for Tourism held a memorial and laid wreaths in memory of George Floyd at the W.E.B Dubois Centre. This followed a petition sent by the government to the U.S. Embassy calling for the safety of members of the black community in the United States.

It perplexes many that a citizen would get arrested for doing a similar thing a day after the government had undertaken same.

The letter expressed the believe that, “a reasoned assessment would determine that the efforts to prosecute Mr. Yeboah are unwise, unfair, and extremely detrimental to Ghana’s economic, political and cultural interests.”

The letter was accompanied by a petition containing 100 signatures.

In its solidarity message, the BLM movement wrote, “we condemn in the strongest terms the criminalisation of protest by the Ghanaian government, which presented itself as a safe haven for African people of the diaspora during the Year of Return and continues to promote itself as the protector of Pan-Africanism. Criminalising acts of Pan-African solidarity does not fall in line with this tradition.”

The fear is that this numerous petitions are likely to have a negative impact on the economic prospects of the country as potential business people are likely to change their investment destination from Ghana due to reported cases of injustices.

The government spent millions of dollars to sell and organize the Year of Return initiative in 2019 and planned the Lauch of the Year Beyond Return in 2020 which was unfortunately marred by the Covid-19 outbreak.

The author is a graduate of Ghana Institute of Journalism. Views expressed in this article do not in anyway represent those of the Media General Group