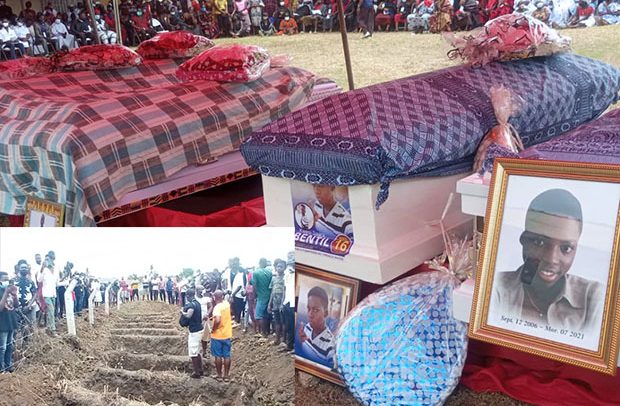 The 13 teenagers aged between 13 and 18, who drowned at Apam in the Gomoa West District of the Central Region Ghana, have been laid to rest.

About 20 children went to the sea in Apam to swim on March 7, but at least 13 of them were later found dead.

Ministers of state, parents, chiefs, pastors and opinion leaders and classmate of the deceased were all present at the solemn final funeral rites at Apam yesterday.

Eleven of the bodies in coffins were lined up of the forecourt of St Luke’s Catholic Hospital in Apam for the public to pay their last respect to them.

Two of the bodies were buried earlier due to their decomposing state.

Delegation from the Presidency, led by the Minister of Fisheries, Mavis Hawa Koomson, donated GH¢10,000 to each of the deceased parents while GH¢5000 given to each of the survivors.

Majority of the victims were from Apam, while two were said to have come from Gomoa Ankamu near Apam Junction, and one girl from Cape Coast.

Joseph Narh, one of the dead teenagers’ father, said he was days away from leaving the country with his family to Spain, saying “I came from Spain a couple of weeks ago and my plan was to carry them (my family) with me. So I came down for just a month and was to leave with them. It has been a big blow,” he said.

Chiefs of Gomoa Akyempim Traditional Council at Apam have said they have plans to build a wall around the road that leads to the sea where the teenagers lost their lives.

The Apam Hemaa, Nana Essel Botchwey III, said on Adom FM yesterday that after the fence wall, they would put a gate to prevent unlawful entry.

“That place is very dangerous. Even fishermen don’t go there to fish and so I could not fathom why these kids did that. It is unfortunate,” she said.

The Gomoa Akyemepim Traditional Council last Monday performed rituals to appease the gods of the land ahead of the burial.

A cow, three sheep, 12 fowls, 33 tubers of yam, and three cartons of schnapps were offered to the gods by a traditional priest to appease them.

During the post-independence holiday, the teenagers sneaked to the estuary of the River Apam to have fun but never returned, and the incident was only detected the following day (Monday) by some fishermen who saw bodies floating ashore.

Traditional leaders in Apam have said they would not rule out superstition connected to the deadly incident and also said the claims that some of the victims might have been having sex in the water could be true because the area where they were was a sacred place.