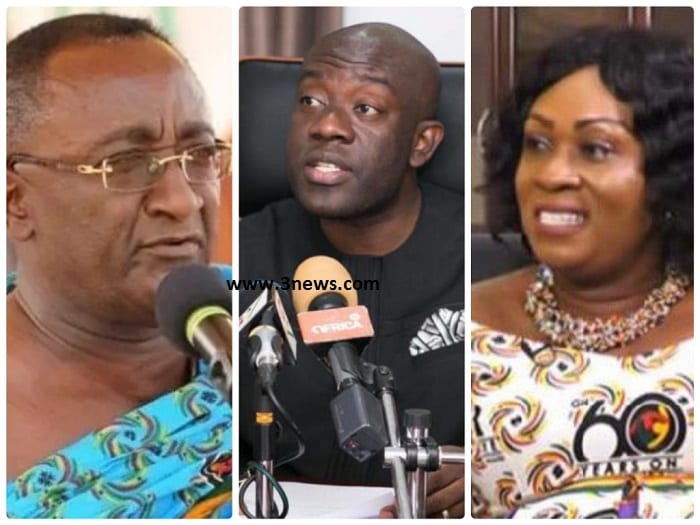 The leadership of the Minority in Parliament has expressed regret over the mass approval of all the ministers nominated by President Nana Addo Dankwa Akufo-Addo and vetted last month.

At a meeting with the Council of Elder of the National Democratic Congress (NDC) on Tuesday, March 16, the two parties agreed that the incident of Wednesday, March 3 “was regrettable and unfortunate and runs contrary to the principles and values of the party”.

The meeting comes exactly after the Council met leadership of the party over the approval of some of the ministerial nominees, who were rejected by the NDC members on the Appointments Committee.

Kojo Oppong Nkrumah, Mavis Hawa Koomson and Dr Osei Afriyie Akoto were the three ministers rejected in the report by the Minority members on the Appointments Committee.

But at plenary, the three received overwhelming votes to be approved as substantive ministers.

This came as a surprise to some staunch members of the largest opposition party, among them the National Communications Officer, Sammy Gyamfi.

Mr Gyamfi took to his official Facebook page the following day to express disappointment in the leadership of the party in Parliament, casting insinuations at the Minority Leader, Haruna Iddrisu, the Minority Chief Whip, Alhaji Mohammed Muntaka Mubarak, and even the Right Honorable Speaker, Alban Bagbin, who until 2021 was an NDC MP.

“Comrades, the betrayal we have suffered in the hands of the Speaker of Parliament, Rt. Hon. Alban Bagbin, the leadership of our Parliamentary group, particularly Hon. Haruna Iddrissu and Hon. Muntaka Mubarak, and dozens of our own MPs, is what strengthens me to work hard for the great NDC to regain power,” he wrote on Thursday, March 4.

“They brazenly defied the leadership of the party and betrayed the collective good for their selfish interest. And we, must not let them succeed in their parochial quest to destroy the NDC, the party that has done so much for them and all of us. The shame they have brought on the party will forever hang like an albatross around their necks.”

But the meeting between the Council and leadership of the Minority in Parliament sought to resolve the fracas.

“The Caucus Leadership have since pledged to uphold the principles and values of the party in our collective bid to develop our country,” Chairman of the Council Alhai Mahama Iddrisu said in a press release issued after the meeting.

“The Council urged National leadership of the party to resolve issues relating to the Caucus leadership in Parliament and called on the rank and file of the party to remain calm, and provide the needed support to our Caucus in order to hold the Akufo Addo government strictly to the principles of probity and accountability.”

It promised that the party will emerge from the setback “more united and focused” and will take on the government squarely.