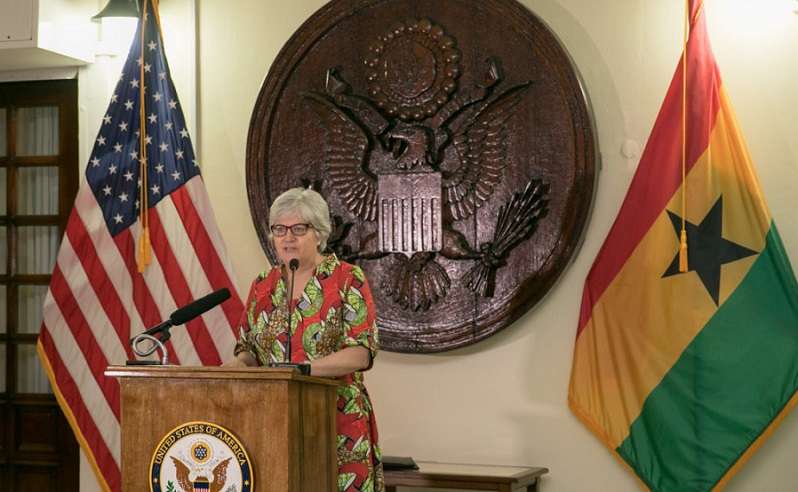 US Ambassador Stephanie S. Sullivan has congratulated the Appointments Committee of Parliament over the recent vetting of the ministerial nominees of President Nana Addo Dankwa Akufo-Addo.

She said the way the Committee conducted its business during the vetting process sent a strong signal that the work of the Eighth Parliament will not be business as usual and that it takes its scrutiny duties very seriously.

She made this known on Wednesday, March 17 when she called on the Speaker of Parliament, Alban Sumana Kingsford Bagbin, and leadership including the Second Deputy, the two leaders of the House, the two Deputy Whips, the Clerk to Parliament as well as some staff of the Parliamentary staff.

The US Ambassador congratulated Mr Bagbin on his election to the high office of Speaker of Ghana’s Parliament.

The two spoke about a number of key issues pertaining to the development of their respective countries and also discussed health, agriculture and the environment.

Speaker Bagbin expressed gratitude for the good relations between Ghana and the US and made reference to the fragility of Ghana’s democracy, saying that a look at the country’s political make-up points to the fact that Ghanaians are no longer interested in partisan politics and that they expect the two main political parties to put the interest of the country first and to collaborate more for the ultimate good of the country.

He also emphasised the fact that accountability is a key ingredient for Ghana’s progress and urged the political class to be mindful of this.

The Right Honorable Speaker also spoke about the need to strengthen the institutional capacity of the legislative branch of government. He also stressed the need for Members of Parliament to be given offices and personnel in their circumstances for ease of consultation and work in the constituencies.

Majority Leader Osei Kyei-Mensah-Bonsu spoke about the benefits of the many knowledge exchange programmes between the two countries and emphasised the need for improved trade relations and a further strengthening of the private sector since it is the engine of growth for any economy.

Minority Leader Haruna Iddrisu spoke about the indicators used for measuring child labour and child trafficking which shows Ghana in a bad light and urged the US to posit the phenomenon in its proper context, saying that by Ghana’s culture, Ghanaian children do assist their parents and relatives in their economic endeavours and this, by no means, has anything to do with child labour.

He also spoke about the menace of money laundering and called on the US to help state institutions to block illicit transfer of funds.

The Tamale South MP also mentioned the need to make state institutions more responsive to the Covid-19 pandemic that they are being.