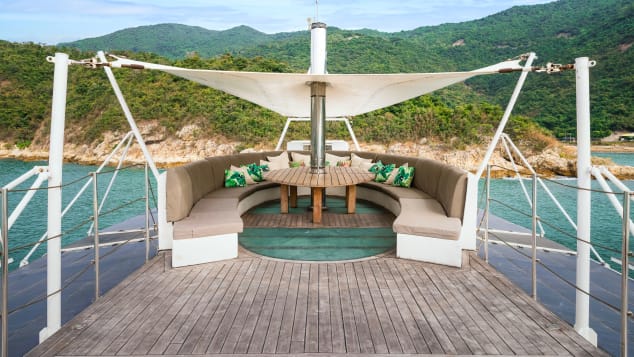 The Star Ferry is one of Hong Kong’s most affordable attractions. But the Star Ferry yacht is another story. The iconic boats, which transport locals and tourists alike between Hong Kong Island and Kowloon, have long been one of the city’s most famous symbols — and popular photo ops. Only one of these ferries has ever been sold into private hands, and it has since been converted into a yacht. That yacht is now up for sale, giving the general public a look at what became of this beloved vessel.

Named Golden Star, it went up for sale in 2011 after one of the city’s cross-harbor ferry lines (between the neighborhoods of Hung Hom and Wan Chai) was discontinued amid expansion of the MTR subway.

The first Star Ferry service across Victoria Harbour began in 1888, and the ride took between 40 and 60 minutes depending on water conditions.These days, thanks to a combination of more modern boats and more reclaimed land shrinking the size of the harbor, a trip on the Star Ferry takes just a few minutes. But those few minutes are all you need to take in some of the city’s beautiful waterfront architecture, and even the most jaded commuter finds themselves gazing at the harbor sunset.When these regular ferries began running, it was the first instance of regular, regulated transport between the island and the peninsula. Travelers could hail private boats (kaitos, a low-fi version of water taxis), but there was no consistency or ability to plan a trip in advance.Hong Kong’s public trams — nicknamed “ding dings” for the sound of the clanging signal they make — would not start until 1904, and the MTR subway system unveiled its first stations in the 1970s.

All boats in the Star Ferry fleet have the word “Star” in their name. There are two remaining routes — between Tsim Sha Tsui (TST) at the southern tip of Kowloon and Central Piers on Hong Kong Island, and between TST and Wan Chai. The three neighborhoods are home to a large percentage of Hong Kong’s hotels, meaning that a ride on the ferry is both scenic and convenient. And even though Hung Hom lost its “Star,” it didn’t lose ferry service. The southern Kowloon neighborhood — home to the Hong Kong Polytechnic University and its Zaha Hadid-designed flagship building — has local ferries that connect it to the working-class North Point neighborhood and will soon have another connecting in to central

Liverpool ran out of steam and ideas as the second half wore on, and Real defended with defiance and resilience to seal the win and set up a meeting with another Premier League side in Thomas Tuchel’s Chelsea