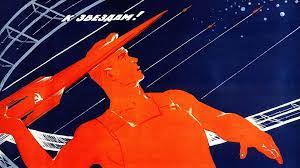 The space race – rockets, satellites, record-breaking cosmonauts – was a way for Soviet artists to adopt avant-garde ideas under the cloak of propaganda.I

It stands outside the gates of the Exhibition of Achievements of National Economy, the giant trade-show-meets-amusement-park intended to show off the might of Soviet industry and science. It was built at a time when the USSR was leading the space race. A time when, to quote the submarine captain in the movie The Hunt for Red October, “the world trembled at the sound of our rockets”. The Monument to the Conquerors of Space is cosmic art on an out-of-this-world scale.

Built of titanium, the 107m (351ft) tall sculpture of a rocket shooting from the ground towers above anything in the exhibition park itself – it’s nearly twice as tall as the Vostok rockets whose missions inspired it, one of which is on display inside the park. The titanium-clad granite sculpture is so large that its base is big enough to house an entire museum, the Memorial Museum of Cosmonautics.

In a political system where religion was banned and only the most revolution-friendly pre-Soviet figures were exalted, Soviet artists turned instead to the iconography of Soviet leaders such as Lenin, the symbols of the USSR’s industry and science – and space.

The Soviet Union’s early lead in the space race, spearheaded by captured German scientists and the brilliance of designers such as Sergei Korolev, became a new canvas for Soviet artists, sculptors and product designers. But its roots go far deeper than that, says Alexandra Sankova, the director of the Moscow Design Museum.

Why aren’t antiviral drugs as effective as antibiotics?