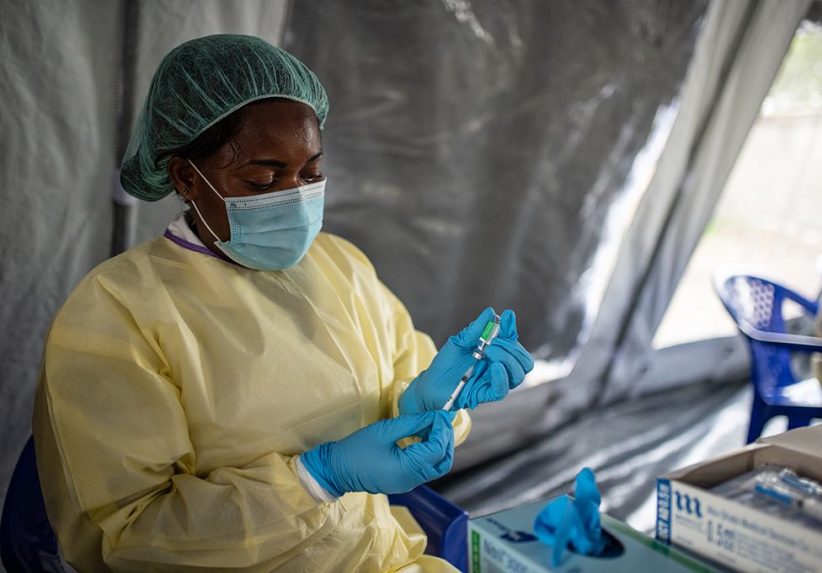 Nurse Jeanne Dusungu is vaccinating anyone who turns up to the white Unicef tent in the grounds of North Kivu provincial hospital in Goma against Covid-19 – but very few are locals.

“There are some false rumours circulating, that the vaccine is fake, that it will make us sterile. There are people who think that,” she says, disbelievingly.

“I tell the people to come and get vaccinated – it is protecting yourself and protecting others, your family, the entire nation.”

But in the Democratic Republic of Congo, the second largest country in Africa and nearly the size of Western Europe, this is proving an uphill struggle.

Only 5,000 people have been vaccinated out of a population of nearly 90 million.

And in the city of Goma, where the rollout has just started after numerous delays, there is a worrying lack of interest.

It means 1.3 million AstraZeneca doses, out of 1.7 million received in early March through Covax – the international fair access scheme – are being redistributed to other African countries for use before they expire at the end of June.

The reasons are complex:

There’s also a lack of trust in the systems and governments and a feeling Covid is less of a threat than many other deadly diseases like Ebola and measles.

A recent outbreak of measles in DR Congo killed more than 7,000 people – many of them children, while Ebola outbreaks regularly occur.

For some Goma residents, Covid is not visible. Claudine, 40, a cleaner, says she has never seen anyone who died from it and is not scared of it, unlike Ebola.

For others in the conflict-hit DR Congo, there are more pressing priorities than Covid-19.

“The war kills a lot more people than corona does,” says Gabriel, 46, a taxi driver.

Josue, 23, a student, is put off by what he hears online and prefers to focus his energy on studying and then finding a job.

“We heard that Covid-19 would kill lots of people but much bigger problems are insecurity and unemployment, because we don’t know even if tomorrow we’ll be alive,” says John Remi Bahati, who is 35 and unemployed.

How many vaccines is Covax delivering?

In Africa, 42 out of 54 countries have joined Covax and received 18.3 million doses between them, with nearly eight million used so far.

The Oxford-AstraZeneca vaccine makes up more than 90% of doses supplied to Africa, which are manufactured in India.

Covax wants to vaccinate at least 20% of the African population by the end of 2021, with the first 3% – 90 million doses – going to health workers and other vulnerable groups.

What about other African countries?

African countries which are not part of Covax can access vaccines through the African Union or through their own deals with manufacturers.

Countries doing this include South Africa, Zimbabwe and Gabon.

In Malawi, where uptake of the vaccine had been very good, there’s a different challenge.

False rumours started spreading that its vaccine stock was out of date after it received supplies of AZ from South Africa, which no longer wanted them.

“Some stopped coming to our facilities completely, saying that they would be getting expired vaccines, whilst those that came ended up hesitating. So that reduced our numbers by about 50%,” he said.

Meanwhile, neighbouring Rwanda delivered all the AZ doses they received into arms within weeks, as did Ghana and Ethiopia, although there are concerns that delays to new supplies arriving from India could delay progress there.

High demand for vaccines in India means no deliveries to African countries until at least June.

The World Health Organization says 22 countries in Africa have used less than a quarter of their supplied vaccines. It says not using them quickly risks another wave of Covid.

It’s now a race against time in these countries to increase people’s trust in all the vaccines.

Dr Ayoade Alakija, head of the African Union’s vaccine taskforce, says real damage has been done by headlines and delays over safety.

“In the US, there were announcements saying ‘don’t take the Johnson & Johnson vaccine but we will give you a Pfizer or a Moderna’. But in most parts of the world there isn’t an alternative,” she said.

Only just over 1% of the population of Africa have been vaccinated with a first dose, compared with 20% in Europe and 25% in the US.

One worry is that there could be uncontrolled spread of the virus among unvaccinated people which could lead to mutations, or a more virulent form of the disease emerging.

To date, there have been about 122,000 deaths from Covid-19 across Africa – lower than the UK’s death toll alone, but under-reporting means the true figure could be higher.

Vaccines are the only way to save lives from Covid-19 in the long term and building trust in them is now vital.

Nicolas Sinumyayo Barole, 60, who works in the health sector in Goma, had the vaccine and says: “Lots of people have not understood the importance of the vaccine.

“I want to tell them about the advantages, tell them to come and vaccinate themselves.

“If the rest of the world is getting vaccinated to stop the spread of Covid-19, then why not here?”