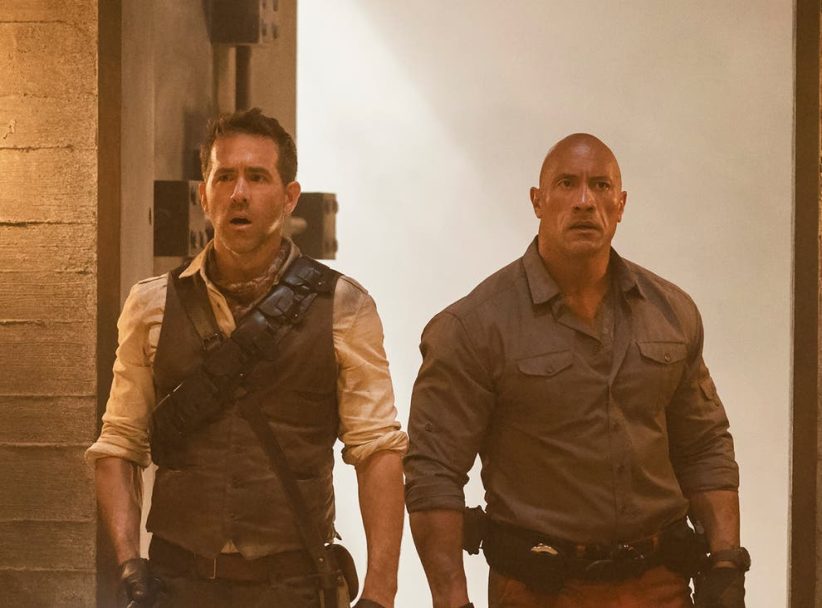 Red Notice, Netflix’s tentpole autumn blockbuster, arrived on the streaming service last Friday to a chorus of middling reviews. The globetrotting heist movie brings together Dwayne Johnson as the strong bicep of the law, Ryan Reynolds as a fast-talking art thief and Gal Gadot as a suave, sophisticated and only slightly better art thief, but many critics felt they’d seen it all before. There are the sanitised reworkings of scenes from other, better action movies: a dance scene that echoes True Lies; a torture scene that nods to Casino Royale; some pilfering of Nazi artefacts à la Raiders of the Lost Ark (Reynolds whistles the Indiana Jones theme for that one, just in case you missed the reference). There are the endless, family friendly gun fights rendered absurd by the fact that nobody – on either side – ever gets hit by a bullet. Then there’s the done-to-death cops and robbers plotline. As Nicolas Cage’s Charlie Kaufman put it in 2002’s Adaptation, while critiquing his brother’s action script: “On top of that, you explore the notion that cop and criminal are really two aspects of the same person. See every cop movie ever made for other examples of this.”

There is, of course, one major difference between Red Notice and the older generation of blockbusters it doffs its cap to: they were created to be seen on the big screen, while Red Notice will mostly be watched on televisions or other, even smaller devices. Given that Netflix only gave the film a limited, week-long run in a relatively small number of cinemas – 750 across the US, compared to the 4,090 currently screening Marvel’s Eternals – it’s highly likely that many more people will end up watching Red Notice on their phones than ever got the chance to see it at massive scale.

Perhaps that helps explain why Red Notice feels so lacking in spectacle. It joins a sad list of largely forgettable Netflix action films from the past few years. Each time they’ve tried to make a blockbuster stick, they’ve ratcheted up the budget with little discernible improvement in quality. David Ayer’s clunky and formulaic Bright (2017), starring Will Smith and Joel Edgerton, cost somewhere in the region of $100m (£74m) to make, while two years later, the preposterous 6 Underground, directed by Michael Bay and also starring Ryan Reynolds, was made with a budget of $150m.

In between them was Triple Frontier, an action-adventure film starring Ben Affleck and Oscar Isaac that cost $115m and has already been largely forgotten about. When that bombed, rumours began circulating that Netflix boss Ted Sarandos wanted to cut back on blockbuster spending, although that was soon denied. Evidently, they’re still willing to get the cheque book out for the right onscreen talent: Red Notice cost in the region of $200m to make, making it Netflix’s most expensive ever original production. It’s been reported that a full $70m of that was spent before a second of footage had even been shot. $20m each went to securing the services of Johnson, Reynolds and Gadot, with a further $10m winging its way to writer-director Rawson Marshall Thurber. And to think, some critics doubted this crew’s ability to pull off a heist!

Thurber, who got his start directing fun, silly comedies like 2004’s Dodgeball and 2013’s We’re The Millers, has since become Johnson’s go-to blockbuster collaborator. In 2016, he made the buddy action comedy Central Intelligence with Johnson and Kevin Hart, followed by the derivative, Die Hard-mimicking Johnson vehicle Skyscraper in 2018. Both films made back their relatively modest budgets and then some, setting up the star/director pair for Red Notice. But Universal balked at their projected production budget of $200m, leaving Netflix to step in to make it rain. What’s striking about Netflix’s power move, however, is that it then gave the film such a limited cinema release. The perhaps inevitable result was that the film barely made back $1m at the US box office before heading directly to the Netflix home page. There, at least according to Reynolds and absolutely no verifiable data, it drew the platform’s highest ever number of first-day viewers for an original film.