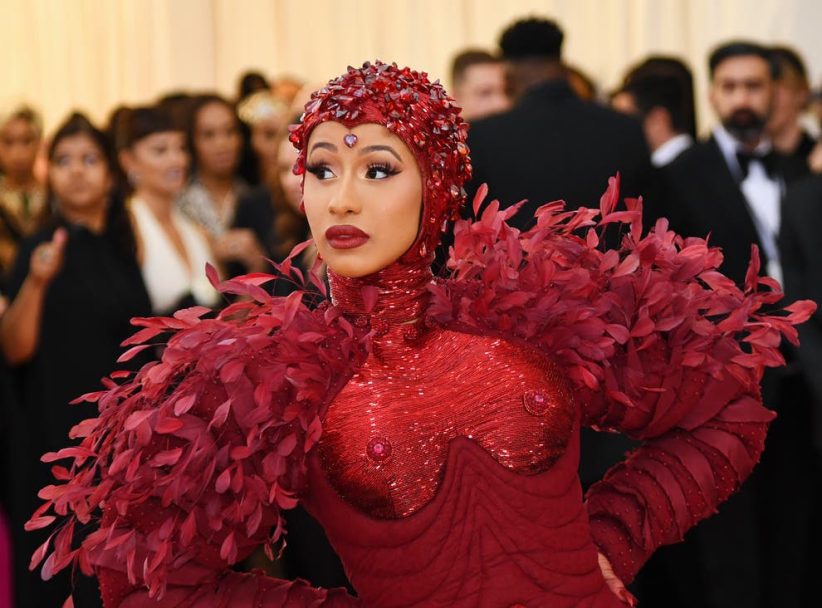 My personality overshadows everything,” Cardi B once told GQ. She’s not wrong. The Bronx rapper has amassed many prefixes to her name. There is Grammy award-winner Cardi B, best-selling artist Cardi B, chart-topper Cardi B. This weekend, just shy of her 30th birthday, she’ll add American Music Awards host to that list. But amid a growing tally of accolades, it is still Cardi B the person – Cardi B, the personality – who remains most captivating.

By now, the saga of Cardi B – real name Becalis Almanzar – is pop culture scripture: stripper turned rap superstar. Her stilettoed stride to the top was as unconventional as it was well documented. It begins with a childhood in the Bronx, where Cardi was born to a Dominican father and a Trinidadian mother. She grew up part of a close-knit Dominican enclave in the city, and listened to reggaeton, bachata and Madonna. In the early 2010s, Cardi took a job at a grocery store to pay for community college. It was her manager who suggested she try dancing at the nearby strip club instead. She’d make a lot more money there than she would selling organic produce at Amish Market, even if it was in singles. Around the same time that she started at the Private Eyes Gentlemen’s Club, Cardi began what would become her real hustle: posting on Instagram.

Cardi’s arrival on the social media platform dovetailed with the network’s new video function. In June 2013, users were able to upload videos to their profiles. It was an artistic opportunity not wasted on Cardi who began prolifically posting brief snapshots of her life. The clips mostly followed the same format: grainy ad hoc videos taken on a poor quality front camera in which she preached street wisdom based on her own life experiences. One of her first ever posts from April 2015 sees a baby-faced Cardi doling out some sage dating advice. “Bitches don’t wanna go out to dinner anymore, bitches wanna go out shopping,” she says bluntly, before taking a big bite out of a hotdog.

In one of her most iconic clips, she’s standing in the hallway of a hotel dressed in a tight skirt and tiny bra top:“It’s cold outside but I’m still looking thotty ‘cause a hoe never gets cold.” Cardi gave pure meme-ready gold in 15 seconds or less. She was candid. Sex, butt injections (not implants, as she has since clarified during a TV appearance) and crass revelations about bodily functions were not off limits. Her appeal was obvious and instant. Soon she had thousands of strangers tuning in just to see what Cardi B was chatting about today.

Her growing popularity got her cast on Love & Hip-Hop, a reality series about mostly forgettable rappers making mostly forgettable music. At this point, rapper was only an asterisk to Cardi’s name. But within months of releasing her first single “Cheap Ass Weave” in 2015, Atlantic Records signed her. If that first track cracked open the door for Cardi, then 2018’s “Bodak Yellow” blew it clean off the hinges. The song – a thunderous, bombastic riff on Kodak Black’s “No Flockin” – was massive. It didn’t take long for it to claw its way to the top of the charts. First, it took over Justin Bieber and Luis Fonsi’s summer hit “Despacito”. Then it unseated Taylor Swift from the top spot. “Bodak Yellow” made Cardi – a relative nobody to those who weren’t clued in on internet subcultures – the first female rapper to top the Billboard Hot 100 chart with a solo track since Lauryn Hill in 1998.

The expanse between influencer and artist is vast, though. Removing things from their home on the internet often proves disastrous. Consider the cringe-worthy performance of TikTok megastar Addison Rae doing eight back-to-back TikTok dances on The Tonight Show with Jimmy Fallon. But any doubts about Cardi’s talent were quashed by her debut album Invasion of Privacy. It was a stylistically diverse record that proved she was neither a one hit wonder – nor a one trick pony. There was more of the hard-slapping rap heard in “Bodak Yellow”. But more surprising were the velvety sounds of R&B, against which she bared her heart on songs including “Be Careful”. There were a number of potential big hitters on the album but it was her swaggering Latin trap single “I Like It” that emerged as No 1 on the US Billboard Hot 100.

In the years since, Cardi has become an inimitable force in hip-hop. Her lyrics have stayed true to their roots: still candid, still horny. Look at “WAP”, her 2020 collaboration with Megan Thee Stallion. The track debuted at No 1 with the most first-week streams ever. It became the song of the summer. And it also provoked the ire of conservatives everywhere. This bawdy duet between two of rap’s biggest powerhouses about the slipperiness of their vaginas felt like a seismic moment in music. “WAP” was downright filthy, and refreshing; a reclamation of female sexuality on a level we’d not seen (or heard) before.

But while Cardi’s tracks continue to make headlines, it’s her personality which is the real narrative engine of her stardom. Amid the US elections last year, Cardi went on Instagram Live to admonish her younger fans for not voting at the same rate of her grandma’s friends. She did so while wearing a pair of humongous sunglasses and a towel on her head. Months later, she discussed the efficacy of social distancing measures and her distrust in Joe Biden on a video call with Bernie Sanders (“Uncle Bernie”, as she affectionately calls him). She has instigated a feud with Peppa Pig and exchanged sweet messages of mutual admiration with Penn Badgley. His face is now her Twitter profile picture – and hers, his.

There have been mistakes, too. There was the time Cardi appropriated Hindu culture in a photoshoot for an advert for her new line of trainers with Reebok. And then the tonedeaf moment she shared a photo of her large Thanksgiving festivities at home in Atlanta when everyone else was following social distancing guidelines. She apologised via social media on both occasions. Remarkably, the apologies sound like her. They are written in her voice, which is to say, they’re forthright, if a bit dismissive. Compare this with the Influencer Apology™ that has emerged in recent years – the teary-eyed video or screenshot of a Notes app with a thin statement of regret and “taking accountability” – and, earnest as it may sound, Cardi’s sorries at least feel sincere. “I wasn’t trying to be disrespectful,” she wrote in response to the advert backlash. “Maybe I should’ve done my research. And I’m sorry, I can’t change the past but I’m gonna do more research for the future.”

The heavy-hitter tracks help, for sure, but Cardi B’s her charisma – her dogged candour and exuberance – that’s the soap cutting through grease. Social media increasingly becomes a way for celebrities to prune their image. But Cardi lets hers grow wild. Sure, there are the obligatory magazine covers and the album promo shots spattered among her feed but her presence is always felt, even if only in a cheeky throwaway caption. Anyone can devise an image with the help of a PR megateam. And yet it takes a lot to transcend that and show who you really are. To quote one of Cardi’s most famous catchphrases, she is “a regula degula schmegula girl from the Bronx”. She’s also just funny as hell.