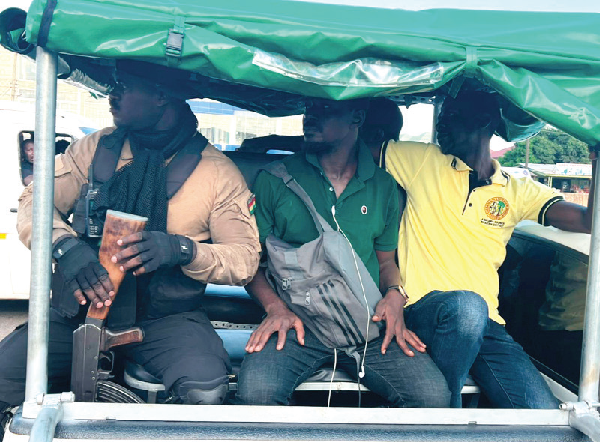 The National Lottery Authority (NLA), in collaboration with the security agencies, has arrested 35 illegal private lotto operators in the Greater Accra Region.

During the operations, which started on Thursday to Saturday, the security agencies apprehended the illegal operators, popularly referred to as Banker to Banker, at Amasaman, Taifa, Lapaz, Adenta, Madina and also seized large sums of money and coupons.

Briefing the Daily Graphic after the arrest, the Public Relations Manager of NLA, Mr Goodfellow Dei Ofei, said some of the dockets were ready and that the illegal operators would be arraigned.

He explained that in September this year, the authority announced its intention to clamp down on the activities of illegal private lotto operators and set out a prequalification phase of the licensing regime where the operators were given a one-month window to register with the NLA in view of their preparedness to operate private lottery.

He explained that the authority after the one month window disqualified 70 companies, particularly because those entities failed to meet the NLA set criteria.

The authority then set their license fee and asked the qualified companies to proceed with the licensing process to be issued licence for the 2021/2022 licensing year.

Mr Ofei said the authority was determined to purge the lottery industry of illegal operators and activities.

“The NLA has been very reasonable with the process, we gave them a fair opportunity to rectify their position with us but as I usually say the recalcitrant elements will always rebel and we are more than prepared to face them squarely”, he added.

He announced the authority had sent more men into other regions to arrest and prosecute anyone operating illegally without the requisite licence or authorisation.

Asked what happens to the disqualified companies who did not meet the criteria, Mr Ofei said “The NLA did not just disqualify them without giving them options.

We gave them two options, one was to consider registering as a Lotto Marketing Company (LMC) so they could sell for the NLA which comes at no cost.

He added that the other option was to register under one of the registered private operators whose number of writers could accommodate them and still meet the threshold.

Ronaldo gone, De Ligt in doubt and Allegri under fire: Are ‘shameless’ Juventus facing a Barcelona-like fall from grace?