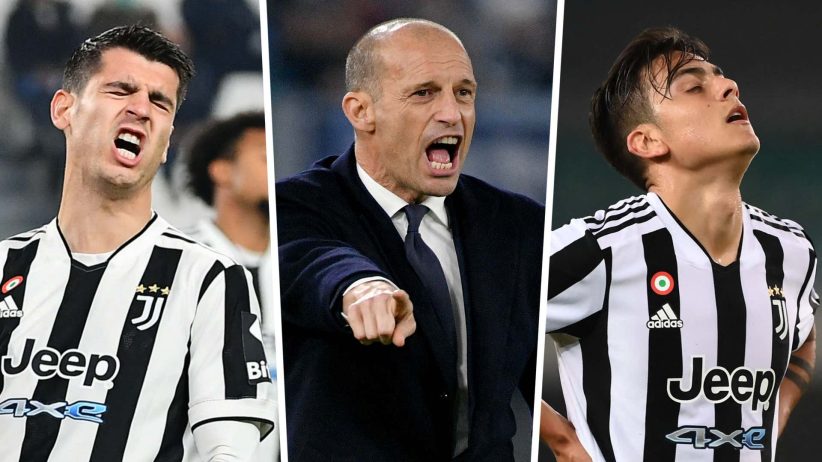 A draw at Chelsea on Tuesday night would have been enough to secure Juventus top spot in Champions League Group H.

However, Bianconeri CEO Maurizio Arrivabene did not want to get bogged down in permutations.

“I think using a calculator in these situations isn’t helpful,” he told Sky Sport Italia before the game at Stamford Bridge. “We just have to go into every game aiming to win.

“But I think the best thing we can aim for is to leave this stadium with our heads held high.”

They did not even manage that.

Most of Juve’s players could not even bring themselves to face their fans after the 4-0 drubbing in west London – let alone leave with their heads held high.

On Sky Sport Italia, Alessandro Del Piero admitted that Juve’s heaviest ever Champions League defeat – and their worst in all competitions since 2004 – would shake the club to its very core.

“It’s a significant step backwards,” the former Bianconeri No.10 said. “Honestly, there are truly very few saving graces from a night like this.

“It’s a heavy blow to the entire club from a psychological point of view.”

It certainly hit hard. There were those that felt that Juve had recovered from the “shock” of losing their most reliable goalscorer, Cristiano Ronaldo, just before the close of the transfer window.

Saturday’s 2-0 win over Maurizio Sarri’s Lazio at the Stadio Olimpico had been heralded as a turning point, evidence that Juve were slowly starting to find their feet again under returning coach Massimiliano Allegri.

Their beating at the Bridge had been coming, though. Few objective observers had any faith in Juve picking up even a point at the home of the European champions.

Granted, the Bianconeri had beaten Chelsea in Turin on matchday two, but they had ridden their luck and pulled off a classic smash-and-grab, with Federico Chiesa punishing the profligacy of the Premier League leaders.

There would be no such wastefulness from the Blues in the return. Even without Romelu Lukaku in attack, Chelsea tore Juve to shreds, with Thomas Tuchel admitting that lessons had been learned from their first meeting.

The German explained that they had realised that “control” would not be enough to beat the Bianconeri; they needed to play directly and at pace.

And they did not disappoint in that regard, utterly overwhelming Juve with their intensity.

Fabio Capello argued on Sky that Serie A sides are no longer capable of competing with the top English teams, and that Italian coaches have much to learn from the likes of Tuchel and Liverpool boss Jurgen Klopp.

There is undeniably a huge amount of truth in Capello’s argument. Television money has distorted the market and Italian clubs are no longer operating on the same financial plain as their English counterparts.

Recent Champions League results speak for themselves. Italy has not had a tournament winner since Inter in 2010, while two of the past three finals have been all-English affairs.

However, it is worth noting that there are teams and coaches in Italy playing – or at the very least attempting to play – dynamic, pro-active football characterised by high pressing.

Atalanta, one of the game’s great over-achievers, represent inspirational proof that it is possible to not only beat some of Europe’s richest clubs, but do so with a thrilling brand of football.

The Bergamaschi are travelling to Turin this weekend for a massive Serie A showdown with Juventus, and Gian Piero Gasperini’s side are arguably the favourites, given they sit fourth in the standings, four points and four places above their hosts.

What is more, while Atalanta have their flaws, particularly in defence, as underlined in Tuesday’s 3-3 draw with Young Boys, right now, they are everything that Juve are not.

They have a clear and comprehensive footballing philosophy, a productive youth sector, an excellent recruitment program and a daring, forward-thinking coach getting the very best out of the players at his disposal.

Juve, by contrast, are suffering from an identity crisis, a club shrouded in uncertainty. It is difficult to ascertain what they are trying to do or where they want to go.

Ronaldo has already jumped ship and Matthijs de Ligt has done nothing to dismiss mounting speculation that he might follow suit at the end of the season.

There is a very real possibility that things will get worse before they get better for the Bianconeri; that Juve are facing a Barcelona-like rebuild after years of gross mismanagement.

Allegri’s return was meant to at least restore stability, on the field at least. After the hastily abandoned attempts to go in a more progressive direction under Sarri and Andrea Pirlo – which, again, illustrates Juve’s muddled thinking in recent years – Allegri was a known quantity and a proven winner.

However, the mounting fear is that football has moved on in the two years that the Tuscan was out of the game.

Indeed, when Capello spoke of Chelsea giving Juventus a “footballing lesson”, many felt it was Allegri who had been schooled at Stamford Bridge.

It was certainly difficult to see any sense in his team selection.

Juve, as has long been known, are painfully short on quality in midfield (the club would listen to offers for everyone bar Manuel Locatelli in January) and yet Allegri opted to play four central midfielders against Chelsea, with Adrien Rabiot once again bizarrely stationed on the left flank.

Meanwhile, Chiesa, one of the game’s best wingers, was deployed up front, with Dejan Kulusevski, a promising young player that Allegri appears to have lost all faith in, starting on the bench.

There are, of course, mitigating factors in Juve’s current struggles on the field. This is not all Allegri’s fault. He did not construct this squad.

Juve have not recruited well since Beppe Marotta’s departure, the Ronaldo project failed to pay off and, despite the continued backing of holding company Exor, the Bianconeri are financially hamstrung in comparison to their English rivals, which is why club president Andrea Agnelli tried so hard to form a European Super League.

There are, then, institutional issues at Juve that extend far beyond Allegri’s influence, which is exactly why Capello advised the six-time Scudetto winner against returning to Turin during the summer.

Capello feared that Allegri would be a scapegoat for the Old Lady’s deep-rooted problems or, as he put it, “the umbrella” that all of the criticism would rain down upon if things started to go wrong.

However, the Bianconeri boss is doing himself no favours in the eyes of the fans, with a conservative, catenaccio-like game-plan that is inhibiting the likes of Chiesa.

Allegri has long been renowned – and often praised – for his pragmatism. He did, after all, lead Juve to two Champions League finals, in 2015 and 2017.

His tactics, though, do not appear to have evolved during his sabbatical. If anything, they have regressed, becoming even more defensive and reactive, much to the chagrin of the supporters.

It is one thing sitting back in the hope of hitting richer and stronger European sides like Chelsea on the break; it is quite another, though, to have less possession and creative spark than Serie A sides working with a fraction of Juve’s budget.

Indeed, under Allegri, ‘little Juve’, as the Corriere dello Sport called them on Wednesday, appear to have adapted a small-club mentality, so do not be surprised to see Atalanta boss possession in Saturday’s game at the Allianz Stadium.

In a way, it could be an even more “tragic” reflection of just how Allegri and Juve have fallen over the past four years.