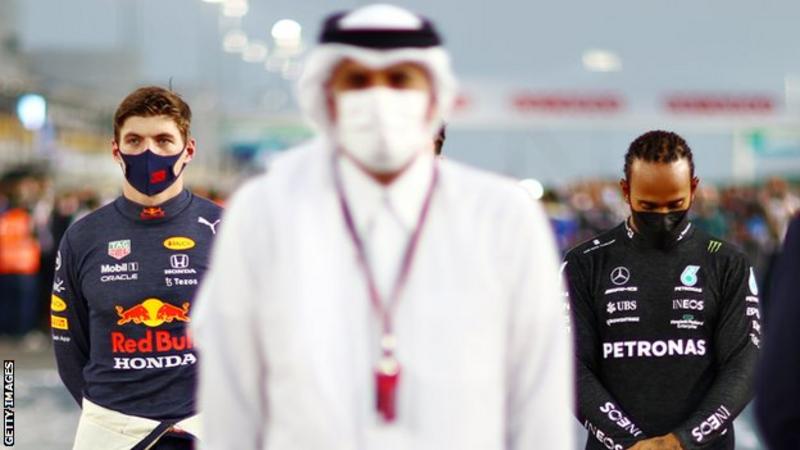 The most intense Formula 1 championship fight for years will be decided over the next two weekends in the Middle East.

Red Bull’s Max Verstappen leads Mercedes’ Lewis Hamilton by eight points. Races in Saudi Arabia and Abu Dhabi bring the season to a close, both on tracks that contain unknowns for the teams and drivers.

Verstappen has the advantage – with his points lead, he can become champion on the new street track in Jeddah this weekend if results go his way.

But Hamilton has the momentum. He is heading into the climax of the season on the back of two convincing wins and with the performance trend clearly favouring his team.

So much is at stake. If Verstappen wins, it will mark the start of a new era – his first drivers’ title, final confirmation of his status as the leading man of the new generation of F1 stars, and the end of seven years of Mercedes domination.

If Hamilton wins, he will set a new all-time record for championships. Already the most successful F1 driver in history, with more wins and pole positions than anyone else, and equal on titles with Michael Schumacher, an eighth crown would move him clear on every possible statistical measure. 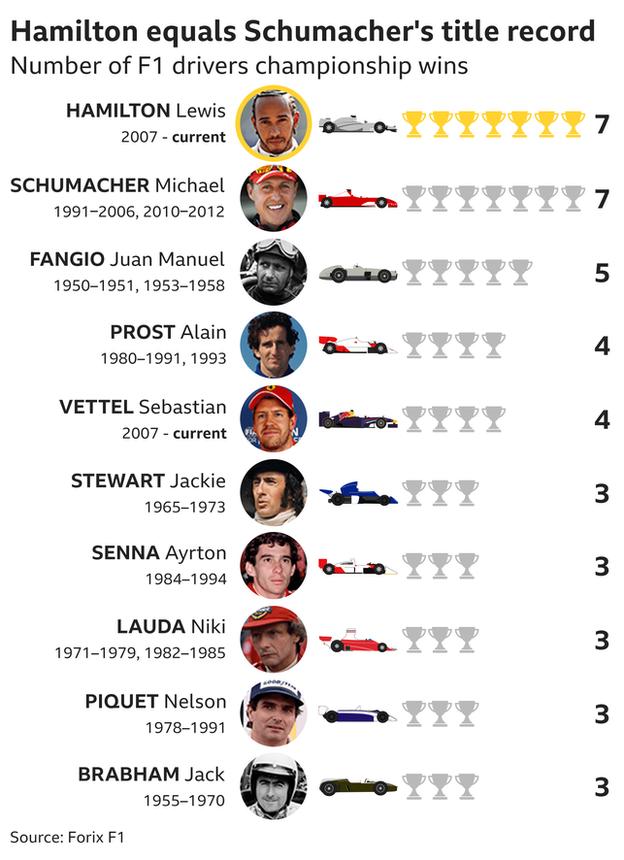 Verstappen can clinch his first title on Sunday in the following ways:

For practical purposes, it’s simpler than that. In a normal race, without crashes, controversies or problems for either driver, the two title contenders will finish first and second.

They are faster than their team-mates, who will be subject to team orders to help them, and no other team is likely to be competitive enough to disrupt their battle.

In that context, what’s at stake is simple. If Verstappen beats Hamilton in Saudi Arabia, the Dutchman is highly likely to end the season as champion.

A Verstappen win with Hamilton second would extend the Red Bull driver’s points lead to either 14, 15, or 16 points, depending on who sets fastest lap, for which a point is awarded. With that margin, Hamilton would be relying on Verstappen hitting trouble in Abu Dhabi to have any chance of becoming champion.

But if Hamilton wins with Verstappen second, the gap between them will reduce to either nothing, one or two points. And that would set up a winner-takes-all showdown at Yas Marina.

Who is faster at the moment?

There is a clear performance trend – and that favours Mercedes.

Looking at the cars’ pure pace in qualifying, over the first half of the season, the Red Bull was faster – by 0.014 seconds on average.

But over the second half of the season, the tables have turned in Mercedes’ favour. Its average advantage in qualifying is 0.248secs over that period.

Nevertheless, qualifying pace does not necessarily determine who will win the race. And in any case it’s very difficult to predict which of the two teams will have the fastest car in Jeddah and Abu Dhabi.

On paper, both teams expect the Mercedes to be the quicker package. It is faster on the straights, and both circuits are what are known as “power-sensitive” – ie engine performance has a large effect on lap time.

But their relative competitiveness has not always followed the expected trends this season. Take the US Grand Prix in Austin last month, for example. A Hamilton stronghold ever since its first race in 2012, Red Bull turned the tables on Mercedes this year. They had the quicker car and Verstappen won the race.

Hamilton believes it is impossible to predict which car will suit which circuit best this season, so tight has it been, so much has form fluctuated.

“I personally don’t see a pattern,” he says. “It’s random. I would imagine by now the engineers maybe have a little bit more of an understanding, but I still personally think it’s quite random and unexpected.

“And obviously there are so many different elements to why that could be: different types of corners, different track surface, different ambient temperatures, track temps. It is wild.”

Be that as it may, Red Bull are worried about Saudi Arabia, in particular. The new street circuit has a number of fast, flat-out sections and not that many corners that require hard braking.

That in itself should favour Mercedes. Then add into the equation that Hamilton will be using for just the second time the new engine he fitted for the Brazilian Grand Prix, when he took his most spectacular win of the season, coming from the back of the grid in the sprint qualifying race, and a five-place grid penalty in the grand prix, to win.

But it’s not necessarily that simple. Will the Mercedes be faster than the Red Bull on the straights in Jeddah? Almost certainly, yes. Does that mean it will be faster over a lap? Not necessarily.

The interaction between track surface and tyres is so critical in F1. If Mercedes struggle to get their tyres into the correct operating window and Red Bull don’t, that could easily swing things back in Red Bull’s favour.

There are question marks about Abu Dhabi, too.

Unlike Jeddah, it is a track well known to teams, having held a grand prix since 2009. But it has undergone extensive revisions this year to try to eradicate its reputation as a terrible track for racing.

A chicane has been taken out before the hairpin on to the first long back straight. The left-right-left-left sequence at the end of the second back straight has been replaced by one long banked corner. And the corners around the marina have been reprofiled to make it easier to follow other cars.

It is, in effect, a new track, demanding new downforce levels, and a new set-up.

The politics and rows

There is a shadow hanging over the final two races – that of a potential protest by Red Bull against Mercedes.

Red Bull have spent the last two grands prix in Brazil and Qatar highlighting what they claim are questions as to whether the Mercedes rear wing complies with the regulations.

They believe that the main plane of the wing flexes backwards, reducing drag and increasing straight-line speed.

Team principal Christian Horner has spoken publicly about this at both races.

In Brazil, the team made a number of representations to the stewards about it. In Qatar, Horner claimed Hamilton’s straight-line speed advantage over the rest of the field as he climbed through the pack in Brazil was “not normal”, and he spoke of the existence of “score marks” on the inside of the wing’s end plate that provide proof of their claims.

Verstappen has claimed Red Bull have video evidence of the wing flexing. There are various photos and videos floating around the internet purporting to show one aspect or another of these allegations.

Mercedes reject Horner’s claims. They say Red Bull are “seeing ghosts”. They say Hamilton’s straight-line speed in Brazil was nothing out of the ordinary given he had a brand new engine in the car, had the DRS overtaking aid in operation much of the time as he passed cars, and they are quicker on the straights than Red Bull anyway.

A new test on rear wing rigidity was introduced in Qatar. The Mercedes wing – the same one, they say, as used in Brazil – passed it comfortably.

Team boss Toto Wolff said: “We struggle to keep up with commenting on the rumours that are being made from that side [Red Bull].”

Red Bull were mollified by what they perceived as a drop in Mercedes’ straight-line speed in Qatar – but Hamilton was using an older engine there, and the reversion to the new one used in Brazil could well lead to Red Bull’s complaints being revived in Saudi Arabia.

Meanwhile, Red Bull have their own problems to do with rear wings.

In three of the last four races, their DRS flap has been seen oscillating when it is open. Each time, Red Bull have tried to repair it.

The problem seems to be caused by some kind of aerodynamic phenomenon that overloads the DRS mechanism, causing it to fail. And it only occurs on Red Bull’s medium-downforce rear wing.

In Qatar, they resolved the problem by switching to the high-downforce wing, Horner claiming this was their “preferred option”.

But the medium downforce wing is the one that they would be expected to want to use at both Jeddah and Abu Dhabi – neither of which, on paper, suit a high-downforce set-up.

Horner admits: “If those wings are required in Jeddah or Abu Dhabi, we will need to have fixes in place to strengthen the DRS mechanism.”

Work has been going on at Red Bull in the gap between races to try to fix it. If they can’t find a solution, though, and that prevents them using that wing, it could put Red Bull at a significant disadvantage at the final two races.

This weekend’s race in Saudi Arabia will likely lead to a revival of the moral questions raised by the last event in Qatar.

Like other sports, F1 has found it impossible to resist the large amounts of money offered by these countries to host events.

Amnesty International, which describes the human rights records of both countries as “extremely troubling”, says the regimes are attempting to ‘sportswash’ their global reputations.

F1 president Stefano Domenicali said before Qatar that he hoped F1’s presence could lead to progress on human rights, and that shutting the countries off would be a mistake.

Hamilton said in Qatar that F1 was “duty bound” to raise awareness of human rights issues in the countries and said they “need scrutiny”.

Both countries have signed expensive, long-term contracts with F1, so this will be a controversy the sport faces for many years to come.