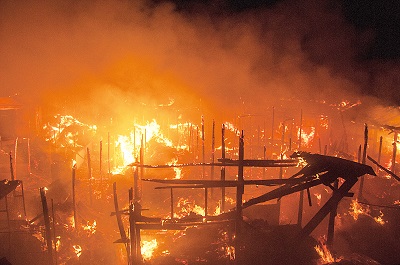 The Tema Region of the Ghana National Fire Service (GNFS), which comprises 13 fire stations, recorded a total of 584 fire incidents between January 1, 2021 and December 30, 2021.

Of the number, 198 were attributed to domestic fires compared to the 180 domestics fires recorded in the region in 2020.

The data from the GNFS showed that domestic fire incidents from January to December 2021 were the highest in the Tema Region.

There were also 30 incidents of bushfire last year while 77 incidents were registered in 2020, and those involving electrical causes stood at eight for last year as compared to 38 the previous year.

For industrial related fires, a total of 13 cases were recorded in the region in 2021. Interestingly, the same figure was reported in 2020.

The Tema Region of the GNFS also recorded one death from the 584 fire incidents with 16 injuries during the period under review.

There were 68 road accidents with 24 deaths and 270 injuries in 2021. The statistics indicate that of the total number of accidents recorded, 37 occurred on the Motorway, while 10 happened at Sege, which is also on the N1.

Out of the 270 injuries recorded over the period, 145 occurred on the Motorway, 68 at Sege and 36 in the Dodowa area. Four injuries were recorded in the Tema metropolis and seven in Ada.