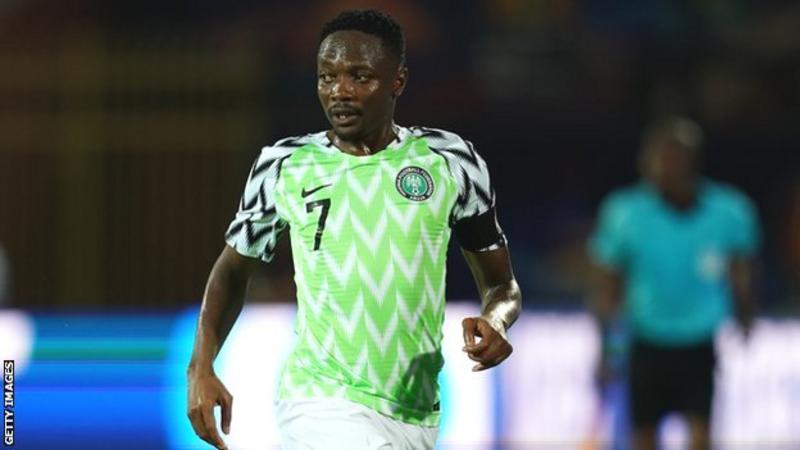 Nigeria captain Ahmed Musa has confirmed that the tournament in Cameroon will be his last Africa Cup of Nations for the Super Eagles.

However, the 29-year-old, his country’s most-capped international, has his sights set on a World Cup finale in Qatar later this year.

Before that he is hoping to end his final appearance at the continental showpiece event on a high, like his first in 2013.

“It’s something that I have really thought about and I feel blessed to say this will be my final Nations Cup with Nigeria,” he told BBC Sport Africa.

“What is important is to try to give my best and try to win it for my country. The players are fully aware of my plans and we have a squad good enough to win it again.

“It [the tournament in Cameroon] looks just like my first one in 2013 when no one gave us a chance, but we ended up as champions of Africa.

“I would like for the story of my Nations Cup to end very well like the first by winning it.”

Musa feels it is time for a younger generation to have their chance with the Super Eagles.

“There’s the need to give a chance to other young players to come through and play in the tournament,” he insisted.”I got my chance as a young player. I’ve fulfilled some childhood memories.

“Everything that has a beginning must come to an end and for me that journey ends here in Cameroon.”

Nigeria begin their 2021 Nations Cup Group D campaign against seven-time champions Egypt on Tuesday (16:00 GMT) – a game which will be shown live by the BBC in the UK.

Fatih Karagumruk forward Musa is Nigeria’s most-capped player in history, having played 102 matches since his debut aged just 17 in 2010.

He helped the Super Eagles win the 2013 Africa Cup of Nations and played for them at the last two World Cups.

Musa netted twice at both the 2014 and 2018 tournaments, making him his country’s top World Cup goalscorer.

Along with his determination to play a part in Nigeria’s quest for a fourth Nations Cup title, the former Kano Pillars, Leicester City and CSKA Moscow winger is hoping to appear at this year’s global event in Qatar.

Nigeria are yet to discover who they will face in March’s play-offs for a spot at the tournament.

“It’s my dream to play in another World Cup,” Musa added.

“I believe we have a squad that is equally determined to qualify in March, but first thing on our mind is to do win this tournament in Cameroon.”

He began his European professional career at Dutch side VVV Venlo played in Russia, England and Saudi Arabia before moving to Turkish top-flight side Fatih Karagumruk at the end of last season.